It’s one thing for weak public officials hiding behind their ostensible support for the First Amendment to rail about extremist hate groups, but it’s another thing for them to have the courage to stand up to armed fascists of any stripe and shut them down before they ravage a downtown, beat up innocent citizens, or worse. If one of these groups ever actually gets in power, and you protest, you’ll be sent to the Gulag or shot in a nanosecond.

From time to time, cities and counties receive requests or demands for parade or assembly permits from neo Nazi-groups, the Ku Klux Klan (the Klan), self-styled anarchists, Young Communist Youth Brigades, and other thug species. Contrary to the currently accepted vogue by cowed public officials, these requests have nothing to do with free speech or the right to assembly.The applicants, who are self-described violent extremists, are simply attempting to create a theater for more violence.

These groups are on official FBI and Defense Department lists as subversive organizations plotting the destruction of the United States. In fact, people who are “members” or who have otherwise associated with them are considered such a threat that they cannot become military officers, possess a security clearance, or receive federal employment.

Similarly, members and sympathizers are theoretically legally debarred from holding public office because it would be impossible to advocate their various doctrines and tactics and at the same time adhere to their oaths of public office, which require officials to swear to uphold the Constitution and laws of the United States of America and the respective state and localities in which the individual proposes to serve.

Neo-Nazism consists of post-World War II social or political movements seeking to revive the ideology of Nazism. The term neo-Nazism can also refer to the ideology of these movements. Today’s Nazis are a self-assigned derivative of the National Social German Workers Party, which converted Germany into a totalitarian dictatorship with disastrous consequences for tens of millions of people and for civilization.

The contemporary Klan is composed of small amorphous and fragmented uneducated groups dedicated to violence and intimidation. They are simply purveyors of domestic terrorism.

No one would give a local branch of ISIS, Al-Qaeda, or other terrorist groups a parade permit. Why would they give one to the Klan or Nazis?

The best response for local public officials is to simply deny the permit. The hate group websites, literature, and actual record of performance often evince their real motives and propensity to violence. This is sufficient reason to deny the permit.

Members of these groups are generally the disaffected dregs of society, educationally deficient, and habitually slothful. When firmly refused a permit, they will often give up and go away on their own lazy accord.

However and in some cases they may lawyer up and attempt to convince a court to order a municipality or county to issue the permit. If the court should order the permit to be issued, the victim jurisdiction should immediately, on the basis of potential civil disorder and danger to the public safety and to property, prepare its own declaration of emergency for the period leading up to the event and for the event itself. It should request the governor to supplement the local declaration with a state declared emergency in advance. These provisions get everyone in the swamp – so to speak.

The oppressed jurisdiction should invoke mutual aid and request both state and federal assistance. It should pre-position large police contingents out of sight but near to the likely field of action and deploy overwhelming force. This should be backed up by a large onsite arrest processing team, which can cuff the arrestees and place them in prepositioned jail buses for transport to an appropriate holding facility without drawing down the forces in immediate contact with the active mass of the so-called demonstrators. Streets in the area of the proposed “demonstration” should be closed off to traffic in advance, and only public safety vehicles allowed. A curfew should be imposed during the hours of darkness if necessary.

If the crowd shows the slightest propensity to violence or failure to follow permit requirements, or if there is property damage, the police should move in with a swift and powerful force. The first rock, broken window, scuffle, or other illegal act triggers the action.

In California, the demonstrators, rioters, or whatever must be given two separate verbal warnings by bullhorn, one minute apart, that they are an illegal assembly and must disperse or they are subject to arrest. 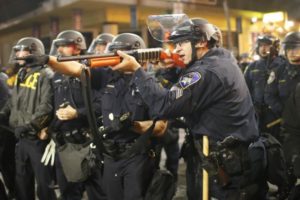 Upon failure to disperse, the visible police lines should drive them backward with munitions (wooden dowels and rubber projectiles) fired from launchers that look like shotguns. The projectiles will not kill or severely injure but cause severe pain and bruises at close range. They can also be bounced off the pavement. A raging 300-pound Klansmen or Nazi hit in the groin area may come away with an improved understanding of civility.

An Oakland Police Sergeant helps out in Berkeley in the picture above. 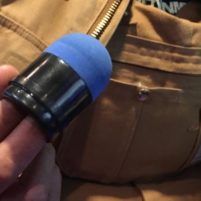 A foam rubber projectile displayed in the picture to the left will get the average Klansmen moving fast.

These may be supplemented by flash grenades to promote confusion and panic. Lead agitators should be marked with paint balls for future arrest.

The problem with tear gas is that it is non-specific, impacts innocent people, and is often overcome by rioters who have gas masks or who can gut it out. Civilian police agencies use CN tear gas, which is weaker than the military CS version. A dose of CS will have you incapacitated and choking and gagging on the ground in seconds. Use of CS in an urban environment would impact many innocent people.

Stragglers and those who attempt to form again from the perimeter should be arrested by mobile arrest squads.

Once the bulk of the crowd is moving (in flight), a separate prepositioned and previously hidden police unit (large in size) can surprise and suppress the mob by hitting it in the flank and rear. At this point any non-compliant resistors can be isolated and subdued by baton and/or pepper spray and turned over to the roving arrest squads so that the main force can keep pushing the crowd.

A fenced detention receiving area with pens should be set up in advance and staffed with jail personnel and manned by the district attorney’s office to process the arrestees. Emergency medical personnel should also be stationed there to deal with injuries and illness. Area fair grounds can often supply this purpose, as they are configured to handle both large crowds and livestock. It is helpful if the site is remote from the scene of the action and the arrestees are transported there by prison buses. Regular municipal transit buses or school buses will work in a pinch. Once the arrestees are in the pens, processing can be conducted slowly so that if individuals make bail and are released, the time is inconvenient, for instance, 2 a.m. This will help prevent them from returning to reinforce their cadres if the event is protracted or multi-day.

Clearly, the City of Charlottesville and the Albemarle County Office of Emergency Services are inexperienced in these regards. They do not live in a region where there is a continuous onslaught such as the San Francisco Bay area, Chicago, or Ann Arbor. (Note in Ann Arbor, Tucson, and Westwood the destructive riots are not about free speech but occur when local state universities loose a major football game – so far no one seems to think busting up store windows in Westwood because USC won is protected speech.)

Background – the latest example:  The problem actually began when a City of Charlottesville City Councilman Wes Bellamy, who happens to be African American, led a demonstration in Emancipation Park (formerly Lee Park) in 2016. The next week he led a protest against a restaurant owner who had expressed disagreement with a presentation by a leader of Black Lives Matter. Bellamy organized a march to attack a private business because its owner expressed free speech.

As a result, he attracted the attention of Jason Kessler, who’s Unite the Right became the permit holder organization leading the disaster in Charlottesville last week. As the local newspaper, the Charlottesville Daily Progress, reported, “Kessler exposed sexist and homophobic tweets that Mr. Bellamy had made from 2009 to 2014. In the ensuing uproar over his fitness as a leader, Mr. Bellamy resigned his teaching position at Albemarle High School as well as his seat on the Virginia Board of Education, although he retains his city councilor seat.”

Meanwhile Kessler is running for the city council. Clearly, a good deal of this issue is about local electoral politics, not free speech.

“Recall local Repub leaders like COLAB’s Mike Brown suspended by his Board for racist remarks after 9/11 or Sam Blakeslee shamed into cancelling a fundraiser featuring a black-face entertainer or Lynn Compton telling me she hates the words Social Justice. Tired of Repubs saying that being accused of racist thinking is actually worse than racism.”

In any case, and back in Virginia, all this led up to Kessler hijacking the Robert E Lee statue controversy and turning it into a deadly riot. Eventually, Charlottesville officials belatedly realized their danger and attempted to move the proposed “demonstration” to a larger park outside the historic and vulnerable downtown.

Kessler and His Unite the Right, legally represented by the ACLU, convinced a federal judge to issue an injunction against the city and allow the demonstration to be held in Emancipation Park.

Note that this week, even the obviously chagrined ACLU had buyer’s remorse and announced that it would not support the free speech rights of organizations that bring firearms and other weapons to demonstrations. Duh?

Stupidly, the city did not attempt to require the counter-demonstrators to also move their demonstration. This different treatment was one of the factors in the judge’s formulation of his decision. In his pleading the city attorney stated:

“The 2,000 who are coming are coming for one purpose and one purpose only, and that’s to protest and counter-demonstrate against Mr. Kessler. We firmly believe there is a threat of violence if it takes place in Emancipation Park. We firmly believe the same threat of violence exists if it’s moved to McIntire Park. The key to preventing violence is to keep the sides apart and it is easier to keep the sides separate at McIntire because it is bigger.”

It was very naive of the city to believe the “sides” would stay apart under any circumstance.

The ultimate deployment by the Virginia State Police was the largest in three decades, and as everyone saw on national television, the preparations and tactics failed.

Local and State officials need to put their money, resources, and courage where their mouths are and quit pretending that the Klan, Nazis, and other violent extremist groups of the left or the right are simply going to exercise their rights to free speech.

Mike Brown is the Government Affairs Director of the Coalition of Labor Agriculture and Business (COLAB) of San Luis Obispo County. He had a 42-year career as a city manager and county executive officer in four states including California. He can be reached at mike@colabslo.org.