The recent furor over the destruction of  Confederate war memorials is a reminder that public art has serious meaning and can profoundly affect the feelings of people, both when it is originally  commissioned and later upon our collective memories, even after hundreds or thousands of years.

Two examples:  What do Berkeley’s “Guardian” and Orange County’s “Bad Dog” sculptures tell us about aspirations and taste in contemporary California?

The “Guardian” sculpture commands the prominent terminus of a divided landscaped boulevard at the western end of the City’s University Avenue and points to the Golden Gate Bridge and San Francisco skyline across San Francisco Bay – one of America’s most iconic views. 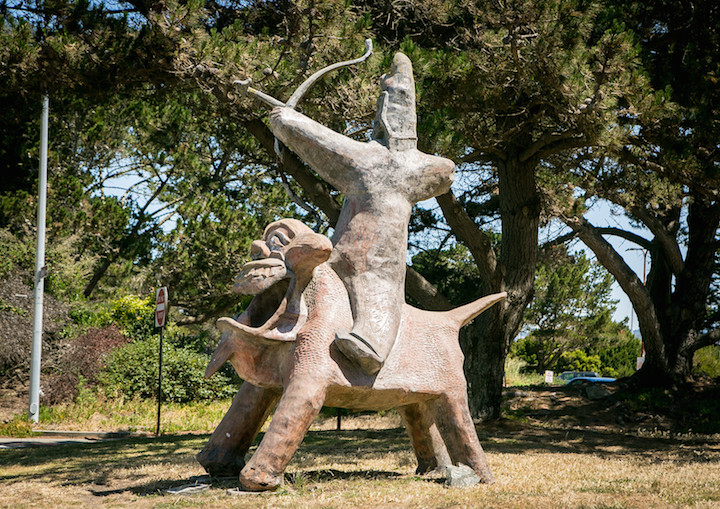 The Guardian – Berkeley Marina Park – was installed in the 1980’s without the city’s permission. It remains an example of the “plop art” movement, which is art that is anonymously installed at night on public property without approval.

When it rains, water enters the mouth of the creature and is then piped to the statue’s penis, where it simulates an animal peeing. Berkeley politicians cherish the statue and maintain it.

More recently, and with official support, the “Bad Dog” sculpture was installed at the Orange County Museum of Art in 2013 – and yes, he is peeing on the Museum. 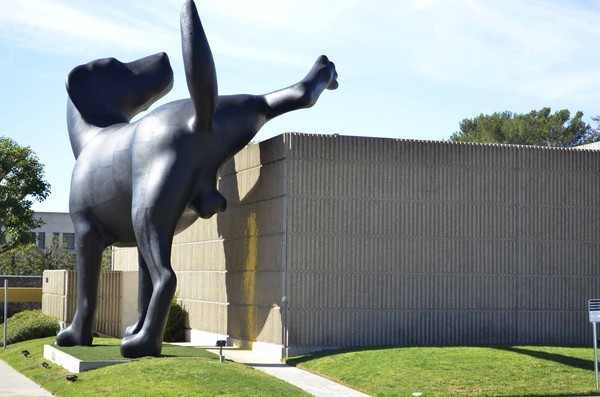 Suffice to say these monuments pretty accurately sum up what California’s dominant political classes and cultural elites think of our civilization and those conservative citizens who celebrate traditional values.  That’s right – “piss on you.”

A contrasting example: What about General Sherman’s atatue? 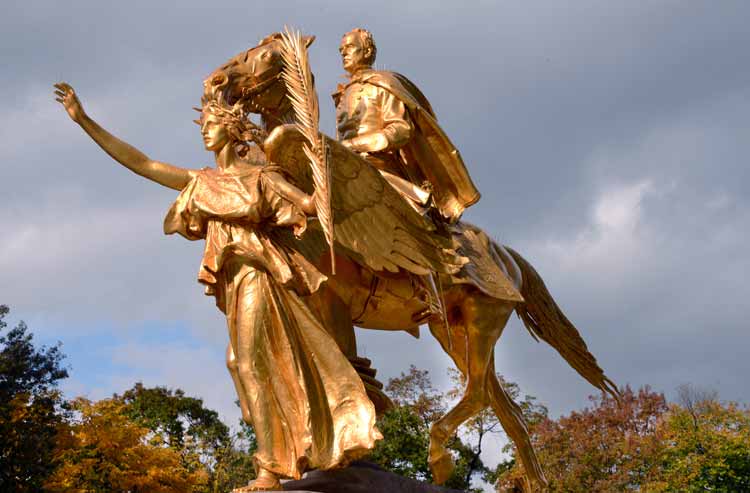 Sherman is being led by the Goddess of Victory. Note the decline in skill, refinement, and taste that have occurred over the past 100 years. Notwithstanding the invention of iPhones and penicillin, from both a cultural anthropological point of view and an archeological point of view (how artifacts show social and historical changes), the difference between the Sherman statue and the two modern examples visited above, evince the general decay of society during a very short interval, when considered on a historical basis.

If 2000 years from now archeologists were to uncover these three statues, with little else to go on, what would they conclude about the state of society over the 100 year period which elapsed from the creation of the Sherman statue to the Guardian? They might theorize that some horrible plague or other calamity had caused such a sudden and major regression and decay.

Sherman was instrumental in defeating the Confederacy. He severed the southeastern Confederacy and burnt the cities of Atlanta and Columbia. He was an advocate of total warfare – that is not only destruction of the enemy’s military assets, but also his industrial and economic ability to wage war.

Sherman systematically destroyed plantations (many a southern matron’s silver became heirlooms in northern dining rooms), towns, railroads, bridges, and factories, severely crippling not only the Confederacy’s ability to wage war but its peoples’ will as well.

Although a Union hero, in contrast to Robert E Lee, he also expressed very strong and well-documented racist views in both speeches and writings. Wonder if this statue is coming down?  Often, and throughout history, it is those who were defeated, whose monuments are purged from history. What of the victors? In any case, both will be pissed on.