During last week’s San Luis Obispo County Board of Supervisors meeting, 3rd District Supervisor Adam Hill took another swipe at 4th District Supervisor Lynn Compton over her steady support for the construction of a new county animal shelter. During the meeting staff recommended that $3.8 of a positive $7 million budget surplus from last year be placed in a capital reserve fund that is being accumulated to construct the new shelter.

Hill’s ire erupted with a comment that Compton is advocating spending “more money on homeless animals than homeless people.” 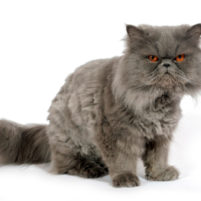 Compton is known (and was well known before she became involved in electoral politics) as a staunch volunteer animal rescue person. Her home and yard are always filled with animals, including cats, horses, alpacas, and others.

In fact, she has achieved some renown around the state for rescuing sick and abused Persian cats and restoring them to health. Apparently the species is especially vulnerable as people misinterpret the serious look. 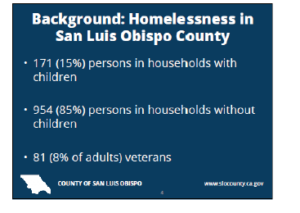 Hill went on to rail about the county’s lack of funding for improving the lot of the homeless. This seems bizarre inasmuch as recently as June 6 the board received an extensive staff report detailing exactly how much money the county does spend on the homeless persons. 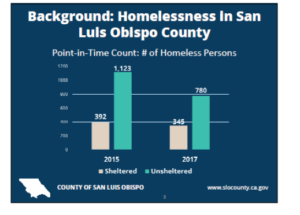 It contained statistical information about the number and status of homeless people. The good news is that the numbers seem to be decreasing. The report also described the expenditures on the homeless and the funding sources.

As best as can be determined per the pie chart below, the county spends a direct $6.6 million on the programs annually. This would be an average of $5,333 per individual. 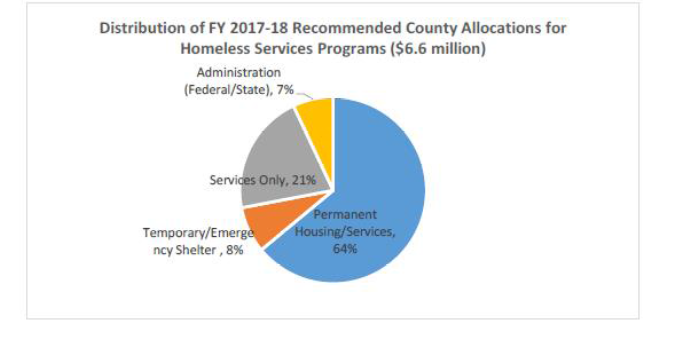 Millions more are spent in the form of health care, behavioral health care, income maintenance, and social services, but data does not exist on how much of these county expenditures (largely federally and state funded) actually go to the homeless versus other categories of recipients. The total expenditures for these services are summarized in the table below. Thus for example, if the homeless received $10 million out of the total costs listed below, they would be receiving a total of $16.6 million (when the direct known expenditures are added in).

This would then amount to about $14,755 per person per year.

Note that this figure does not contain direct expenditures from the federal and state governments that some of these individuals are receiving, such as Social Security, Supplemental Social Security, disability payments, veterans’ benefits, or Medicare payments to providers on their behalf. 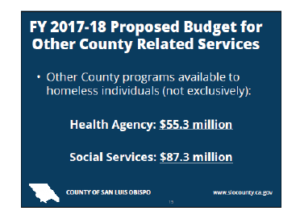 All this information was generated in the first place because Supervisor Hill keeps whining that the county isn’t doing enough for the homeless. He continuously postures that adding funding for road maintenance or state mandated groundwater management erodes the funding for the homeless. Now it’s the animals that are the problem.

It would seem not to be the case.

As we have noted in the past, homelessness is a state of not having permanent shelter. A significant problem is that since the 1980’s, instead of dealing with the fundamental concept of housing as shelter, government trendiology has taken the therapeutic approach.

Under this approach government policy makers, bureaucrats, and not-for-profits have determined that instead of building housing, they will cure the underlying causes of homelessness, which they regard primarily as mental illness, alcohol abuse, and drug abuse. They assume that if persons were not afflicted with these maladies, two of which are self-inflicted, they would happily eke out a living doing whatever crummy menial jobs are available at the bottom end of the economic ladder.

While possibly well intended, this strategy fails to recognize that having permanent, decent, and secure shelter is an important component of not aggravating mental illness. It is also a necessary support to recovering from alcohol or drug abuse.

With only about 1,200 homeless individuals in the whole county, you would think the county government could solve the housing problem by approving homeless vehicle parks, “little houses,” small manufactured home parks, low income single-room occupancy apartments, and so forth.

Of course this would be too dangerous politically, because the facilities would have to be located somewhere. Those “somewheres” would offend NIMBY’S, environmentalists, and other elites to whom Hill and his alt left buddies pander.

Moreover, if the problem were actually solved, there would be no need for a variety of homeless-serving agencies, county jobs, and endless handwringing. In effect, solving the problem would undermine an industry.

The sign in the photo to the right expresses the political left’s true approach to homelessness, in this case in a city politically dominated by a well-recognized leftist oligarchy.

If a huge earthquake destroyed most of the housing stock in San Luis Obispo and the five cities area, trailers, mobile homes, and other special units would be installed in weeks, housing tens of thousands. Where is Hill’s motion to direct staff to prepare a physical and fiscal triage plan to house only 1,200? I’m sure each city and each unincorporated urban village in the county would take their proportionate share.

If it’s a humanitarian emergency, the normal glacially slow and costly zoning and permitting requirements could be suspended.

One Comment about “Adam Hill’s political games hurt the homeless”