It’s a well-known fact that supervisorial candidate Jimmy Paulding is joined at the hip with the SLO County Progressives co-chaired by Nick Andre. In fact, Nick Andre is Jimmy Paulding’s campaign manager. Paulding seems like a nice, well-intentioned fellow. But what does Paulding’s close alignment with this group say about him?

The Progressives are a group that uses every trick in the book to create political theater and generate public attention for its single-minded, rigid agenda. It’s a borderline cult with a political monoculture intolerant of any other views than their own. These ideological zealots are determined to do whatever it takes to get their own way, representative democracy be damned.

With schizophrenia in the news, it’s on display within the Progressives as they embrace both anarchy and big government. If that’s not schizophrenia, what is?

For a candidate for public office to embrace the Progressives is a frightening prospect. The perils of Paulding will be the perils to us all if he succeeds in getting elected to office. Allowing him to empower the Progressives and their “means justifies the ends” politics with the result of letting their rigid ideology metastasize itself in our SLO County’s governance is downright scary.

Ask yourselves why Paulding wants to align himself so closely with Andre and the Progressives when they take such actions as:

Continuing the campaign of harassment of Sheriff Ian Parkinson over the Holland matter, the Progressives showed up in force at a community meeting he hosted that was held earlier this week in Santa Margarita. Shouting out their choreographed yet misinformed questions while Parkinson was trying to speak, they did their best to disrupt the meeting.

If the Progressives didn’t exist, Parkinson would have to invent them. After all, they and their behaviors are turning out to be the keys to Parkinson’s reelection. Could the Progressives be the cause of the demise of Jimmy Paulding rather than his saviors? Time will tell. 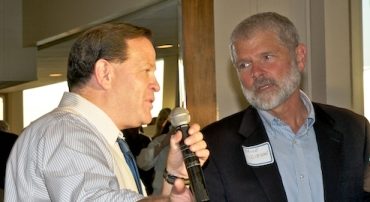 It’s also well-known that Paulding enjoys the strong support of supervisors Adam Hill and Bruce Gibson in their desperate quest to return to power on the SLO County Board of Supervisors.

If Paulding wins, one need only look at the San Luis Obispo City Council to see what happens when the Progressives come into power. Tax increases, bigger government, expanding overregulation, creating new bureaucracies, and their single-minded determination to have us live the way they want us to live.

This band of Progressives is nothing like the enlightened Progressive movement that rose under the presidency of Theodore Roosevelt in the early 1900s. No, these Progressives have moved from regressive to repressive.

Were they to take control of our Board of Supervisors, a tyranny of ideas to be imposed upon us all with not be far behind. Such are the perils of Paulding.

10 Comments about “The perils of Jimmy Paulding”