Six times in the Declaration of Independence Congress said that denial of access to independent, honest and opened courts was cause to sever ties with England.

An independent honest judiciary is the lynchpin holding our democratic-republic together. Without effective access to courts, people who have been wronged turn to vigilante self-help “justice.” Improvident and short-sighted administration by judges in San Luis Obispo County has chipped away at citizens’ practical access to justice.

Other county offices are opened 8 a.m. to 5 p.m. The gateways to the court, the clerk windows, don’t open till 8:30 am and closes at 4 pm. Working folk have impaired access. 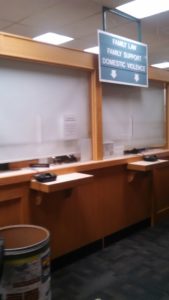 When other county offices have opened phones five days each week, the San Luis Obispo’s Superior Courts restricts the days and times for the public or their lawyers to phone court clerks, family court services (mediation), and probate investigators. The Court’s website doesn’t even keep up with the times or days when phone access is closed down.

All citizens, members of the press, lawyers, witnesses, and jurors face these physical barriers to justice.

When banks are opened from 8 or 9 a.m. till 6 or 7 p.m. Monday through Friday, and even for significant hours on Saturday, with opened doors and opened phones; shouldn’t the public’s halls of justice be as freely available? When requiring lawyers to file electronically is saving the courts bushel-bails of money, shouldn’t the public have more access, not less to open doors and open phones?

This is not a question of judicial integrity. It is one of improvident and short-sighted administration critical to whether citizens have access to courts, to counsel and to justice. These are the very reasons the people of California have reserved the right in our Constitution to directly elect Superior Court judges, instead of leaving the selection of judges to governors, to other sitting judges or to bar associations.

Grand juries have been hobbled by the local judiciary. A new per-document fee, reminiscent of “the Stamp Act” has been imposed by local judges as a financial barrier to middle-income residents getting legal help or justice.

As we approach the June 2018 election of Superior Court judges, think about the benefit of bringing on new Judges not selected by the governor, the bar, or the other judges. Vote for candidates who pledge to roll back careless administrative barriers to justice.