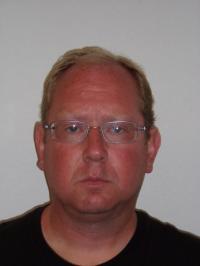 A San Luis Obispo man twice convicted of child molestation is in the SLO County Jail following an arrest on Monday.

San Luis Obispo police arrested Jonathan Oscar Davis, 43, and booked him in jail on a charge of misdemeanor battery and one unlisted count.

In 2007, Davis was convicted of molesting a child under 18 while having a prior conviction for the same offense. He was released from custody in 2008, according to the Megan’s Law database.

KSBY reports officers arrested Davis after a mother told police she caught the man rubbing the hair of her 10-year-old daughter at Sephora in downtown SLO. Following the arrest, another mother came forward and said Davis grabbed the arm of her 8-year-old daughter in the downtown area the day before. Both of the incidents allegedly occurred this week.

Police say it is unclear what Davis’s motives were in these incidents, but the latest allegations are not as severe as his last child molestation case. Police are currently working with the San Luis Obispo County District Attorney’s Office on filing appropriate charges to keep Davis in jail until he is arraigned.

Davis currently remains in custody with his bail set at $5,000. Police are asking anyone whose children may have recently come in contact with Davis to contact the police department.