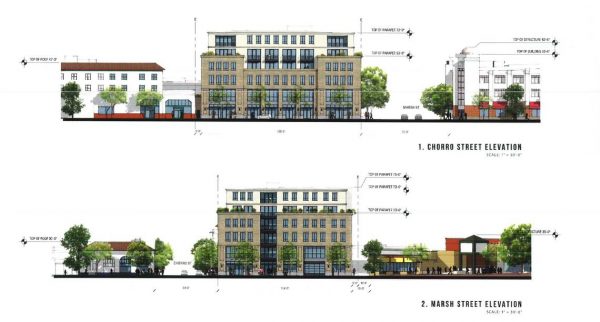 In the aftermath of an aborted entertainment venue project involving a pair of controversial developers, a prominent local development firm and an international real estate company have a new proposal for the downtown San Luis Obispo site: a mixed-use high density housing development.

The new project proposal calls for a 75-foot high building at the corner of Marsh and Chorro streets that would include a total of 55 apartment units. The proposal has emerged as city officials are okaying large developments downtown and around San Luis Obispo, causing many residents to grumble about blocked views and overdevelopment.

San Luis Obispo oficials had approved a combination bowling alley, restaurant and music venue project on the corner of Marsh and Chorro. The project was recently scrapped after Jeremy and Joshua Pemberton allegedly failed to pay rent to Jamestown SLO Premier Retail LP, a subsidiary of the international real estate firm Jamestown.

On Tuesday, Jamestown Premier, in conjunction with Copeland Properties, submitted an application to build a 75-foot high mixed-used development at the downtown SLO site. The proposal calls for retail space on the ground floor, office space on the second and third floors and apartment units on the fourth, fifth and sixth floors.

The city has a 50-foot limit in the downtown commercial zone, but the planning commission can award permission for a building to be as high as 75 feet if it meets at least two of the city’s policy objectives, which include affordable and workforce housing, historic preservation, pedestrian amenities and energy efficiency. The developers say their project would meet the requirements of workforce housing and historic preservation.

Community Development Director Michael Codron said the project would qualify for the workforce housing requirement if 5 percent of its units were designated for low-income housing or 10 percent for moderate income housing under deed restrictions that base affordability on income levels. In order to meet the historic preservation requirement, the developer would have to fund the conservation of a significant historic structure in the city.

The project applicants are likewise requesting to build at a rate of density that is 30 percent higher than what the city typically allows. Codron said city officials will have to review the application to determine if they can offer an exemption from the density rule.