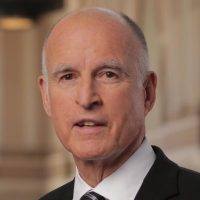 Having cruised to victory in past races without having to spend all of the funds he raised, California Gov. Jerry Brown is now set to retire while he is still sitting on a $14.9 million war chest. [New York Times]

Brown has pledged an all-out fight to defeat an initiative to repeal California’s recent gas tax increase, though he said he would not spend his war chest on the battle over the tax hike. The long-time politician is not tipping his hat on how he will spend his approximately $15 million in campaign funds, but he has indicated that holding onto the money will give him somewhat of a kingmaking role in future initiative battles or political campaigns.

“Having a fund increases one’s relevance,” Brown said. “You want me to spend it and have no more money and nobody is going to call anymore? That’s really dumb.”

Brown’s reluctance to spend the funds on the gas tax battle may be due in part to the fundraising he is doing related to the initiative. Brown said he has already raised $25 million to fight the gas tax repeal.

“And we’re not anywhere near finished,” he said.

California’s gas tax increase, which took effect last year, raised the base tax on gasoline 12 cents from 18 cents per gallon to 30 cents per gallon. Taxes on diesel increased even more.

The excise tax on diesel increased 20 cents from 16 cents per gallon to 36 cents per gallon, and the diesel sales tax rose from 1.75 percent to 5.75 percent. Additionally, the gas tax legislation created a new vehicle registration fee that ranges from $25 to $175 annually.

An initiative to repeal the gas tax recently qualified for the November ballot. If the repeal measure were to pass, it would reduce state transportation tax revenue by $2.9 billion in the upcoming fiscal year and by $4.9 billion annually thereafter.

Gas tax revenue is primarily intended to support state highway maintenance and rehabilitation, as well as local streets and roads, mass transit and bicycle infrastructure. Critics say the tax hike is compensating for frivolous spending by Brown and Caltrans.

Republican candidate for governor John Cox is making the gas tax repeal a focal point of his campaign. Polls have indicated the repeal initiative will be a competitive campaign.

But Brown, who signed the legislation into law, said the gas tax is not his sole issue of focus.

“It’s not the only issue that will come up in my lifetime,” Brown said. “There will be other issues I want to spend money on. Maybe you’re a one-trick pony. I am not.”