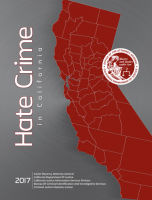 San Luis Obispo County law enforcement agencies reported nine hate crime incidents in 2017, three times more than in 2016, according to California Department of Justice statistics. However, hate crimes are not necessarily trending up in SLO County.

The state of California defines a hate crime as a crime motivated by the victim’s race, ethnicity, national origin, religion, gender, sexual orientation or physical or mental disability. The state Department of Justice tallies hate crime incidents reported by law enforcement agencies. Many of the incidents do not result in charges being filed in court.

The nine incidents involved a combined 14 victims and six suspects.

Only three of SLO County’s 2017 hate crime cases were referred to prosecutors. Charges were filed in each of the three cases.

In 2017, the groups in California that faced the sharpest rise in hate crime incidents were Hispanics and Jews. Anti-Hispanic incidents reported by law enforcement rose 51.8 percent in 2017, while anti-Jewish incidents increased by 26.8 percent.

Already in 2018, San Luis Obispo police made a hate crime arrest. Officers arrested a San Luis Obispo High School student who threatened to physically assault another student because of his autism and also engaged in a physical altercation with the victim.