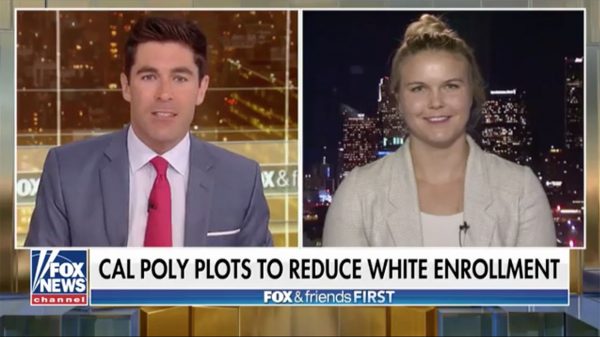 On a live segment of “Fox & Friends First” that aired Thursday morning, host Rob Schmitt said that Cal Poly is “deliberately slashing the number of white students” and “moving towards a race-based admissions process.” On Friday, Fox News issued a correction and an apology regarding the false allegations. [Mustang News]

During the interview with Cal Poly senior Roberta Martin, it was also falsely stated that Cal Poly planned “to limit the number of white students to 40 percent of the campus population.”

University officials quickly refuted the allegations which resulted in the segment being pulled and an apology from Fox News.

“We said the university is working to diversify their campus by deliberately reducing the number of white students,” the apology says. “However, in a statement provided to us yesterday, Matt Lazier, the Media Relations Director of the University, says quote, ‘Cal Poly has not, does not, and will not use applicants’ race as a factor in admissions.’ We apologize for our factual error.”