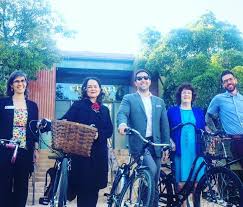 After a SLO Chamber subcommittee provided input to the council urging for a “moderate” height limit increase to 60 feet in the downtown core, the council in 2007 on a narrow 3-2 vote approved a maximum building height increase from 50 feet to 75 feet.

What can you do? Write letters opposing these building heights and increased densities to the planning commission and/or city council. You only have between now and Sept. 4, when the city council reviews the zoning regulations update to submit your letters and/or provide oral testimony.