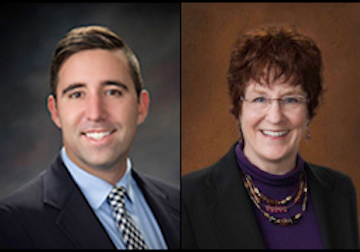 In the latest developments in the SLO County council races, two newcomers are vying for seats on the San Luis Obispo City Council, while a Grover Beach councilman is seeking to become mayor of the South County city.

San Luis Obispo council members Carlyn Christianson and Dan Rivoire are up for reelection this year. Christianson, who has already served more than a full term on the council, has said she will run to keep her seat, while Rivoire, who is completing his first term, is opting not to launch a bid to hold onto his seat.

Flickinger has worked as a communications and marketing consultant and previously served as the president of the Los Verdes Park Homeowners’ Association, which challenged the planned Avila Ranch development near the San Luis Obispo airport. Stewart is the director of parent and student philanthropy at Cal Poly.

With Grover Beach Mayor John Shoals stepping away because of term limits, Councilman Jeff Lee is running to fill the mayoral seat. As a day job, Lee serves as an engineer in the San Luis Obispo County Public Works Department.

Lee states on his campaign site that one of his goals as mayor would be to ensure the safe and orderly operations of medical marijuana businesses. On the council, Lee, along with Shoals, pushed for bringing pot shops into Grover Beach, including some operated by businessmen with questionable records. Both Shoals and Lee received significant campaign contributions from the pot industry during the last election cycle.

It is unclear if anyone plans to challenge Lee for the mayor’s seat. Lee is running for mayor in the middle of his council term. If he were to be elected mayor, the council would have to appoint someone to fill Lee’s seat or call for a special election.

In the Grover Beach council race, incumbents Barbara Nicoll and Mariam Shah plan to seek reelection. No challengers have thus far emerged in the race.