In the latest battle between progressives and the party establishment, the California Democrats endorsed the progressive-leaning United States Senate candidate who is challenging the state’s senior senator who has been in office for more than a quarter century.

Sen. Dianne Feinstein, 85, has served continuously in the U.S. Senate since 1992. In the November election, Feinstein is facing a challenge from fellow Democrat Kevin de Leon, a state senator who served as president pro tempore of the California Senate from Oct. 2014 to March 2018.

On Saturday, 65 percent of California Democratic Party delegates voted in favor of endorsing de Leon. Feinstein only received 7 percent of the vote, while 28 percent of delegates opted not to endorse a candidate.

According to party rules, a candidate must receive 60 percent of the vote from delegates in order to secure the state party’s nomination. Following the vote, de Leon released a statement saying the endorsement was a blow to the party establishment.

“Today’s vote is a clear-eyed rejection of politics as usual in Washington, D.C.,” de Leon said in a statement. “We have presented Californians with the first real alternative to the worn-out Washington playbook in a quarter-century. As the California Democratic Party’s endorsed candidate, I renew my call for a debate.” 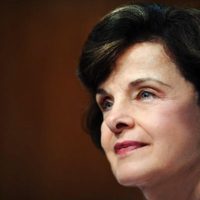 In advance of the vote, Feinstein’s campaign had said an endorsement of de Leon would increase the tension between progressives and the Democratic Party establishment. In the aftermath of U.S. Senator Bernie Sanders’ run for president, as well as the election of President Donald Trump, progressive have repeatedly clashed with establishment members of the state party, particularly at conventions.

Saturday’s vote took place at a meeting of the California Democratic Party Executive Board. The executive board has become increasingly progressive in recent years.

Nonetheless, de Leon has an uphill battle in his bid to unseat Feinstein.

In last month’s primary election, Feinstein received 44.2 percent of the vote. De Leon only received 11.8 percent, though that was good enough for second in an open primary with a field of more than 30 candidates.