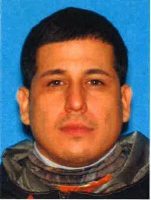 A man accused of shooting and killing two men in a Fresno tattoo parlor Saturday night turned himself in at the Pismo Beach Police Department on Sunday. [KSFN]

Cruz Pedro Hinojosa, 27, of Fresno, allegedly shot and killed the owner of Fresh Ink Tattoo Studio, as well as another man who was inside the business. Both victims were shot multiple times and died upon arrival at the hospital.

With help from witnesses, Fresno detectives quickly identified Hinojosa as the alleged gunman. Police searched for him overnight.

Authorities have identified the victims as Jesse Hernandez III, 35 and Pisa Xayapheth, 30. Xayapheth is reportedly the owner of the tattoo parlor, which is located in Fresno’s Tower District.

Fresno police said the shooting was likely a personal matter and not gang-related, but they have yet to disclose a possible motive.

A candlelight vigil was held outside the tattoo parlor Sunday evening. Numerous people packed the street outside the business to pay their respects.