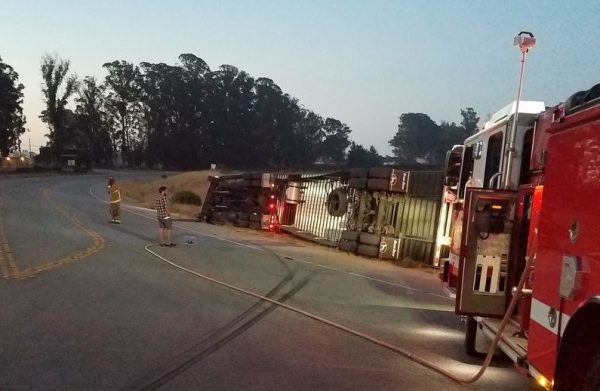 At about 5:30 a.m., the big rig rolled over on Highway 1 in rural Arroyo Grande near the intersection of Guadalupe Road and Willow Road, according to Cal Fire. The truck driver suffered a minor injury in the crash.

Hazmat crews reportedly came out to the scene as a result of something that spilled during the accident. An investigation into the crash is ongoing.

Shortly before 8 a.m., an SUV rolled over and came to a rest upside down on Highway 1 near Cal Poly. While heading southbound near Stenner Creek Road, the driver of the SUV reached for a cup of coffee and lost control of the vehicle, according to the CHP. [KSBY]

The SUV driver suffered minor injuries. One of the lanes on the highway was closed following the crash, and traffic backed up in the area.