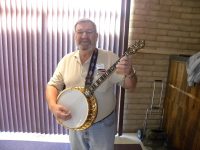 More than a month after a surprising murder at a senior living facility, Santa Maria police have released a description of the suspected killer. Police are searching for a Hispanic man between the ages of 30 and 40.

At about 10:30 p.m. on June 19, an unknown suspect stabbed Thomas Dutart at the La Maria Mobile Home Park, a community for people age 55 and up that is located at 1701 South Thornburg Street. Dutart was transported to Marian Regional Medical Center, where he died of his injuries.

Police now say, prior to his death, Dutart described the suspect as a Hispanic man between 30 and 40 years old, about 5 feet 10 inches tall, heavyset with curly hair. A Santa Maria Police Department press release contains no further information about the suspect.

Authorities have not disclosed a possible motive for the stabbing.

Dutart was an active community member who had previously served as the president of the Santa Maria Valley Senior Citizens Club Board of Directors. Dutart’s Facebook profile showed he was a musician.