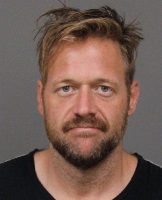 A 6 foot 4 inches tall, 250-pound man battered his 63-year-old father and struck him on the head with a lamp during a domestic dispute on Sunday, according to the Paso Robles Police Department.

After receiving word of a physical fight between two men at a home in the 600 block of Moss Avenue, officers arrived at the residence but found no signs of a disturbance. No one answered the door, police said.

Within minutes, though, officers were redirected to a local church, where the victim had driven himself. Police learned Matthew Malloy, 38, had attacked his father after he was unable to locate his mother in the home.

Malloy struck his father several times, then picked up a lamp and hit his father on the head with it. Malloy’s father suffered multiple injuries to his face and torso before managing to escape.

As of Tuesday morning, Malloy remains in custody on charges of felony battery causing serious injury, felony assault with a deadly weapon and two counts of having an arrest warrant for failure to appear. Malloy’s bail is set at $65,000.