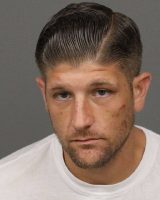 A traffic stop conducted Wednesday afternoon in Oceano netted 9 grams of methamphetamine and approximately 6.5 grams of heroin, as well as a loaded handgun, each of which were found inside the vehicle of a felon from Arroyo Grande, according to the San Luis Obispo County Sheriff’s Office.

At about 3 p.m., Sheriff’s Gang Task Force members made a traffic stop on an SUV for a vehicle code violation near the Pike and 23rd Street, according to the sheriff’s office. Task force members identified the driver as Jesse Richard Wallace, 32. A check of Wallace’s driver’s license revealed that it was suspended.

Authorities called a state parks K-9 out to the traffic stop. The K-9 alerted officers that there were narcotics in the vehicle.