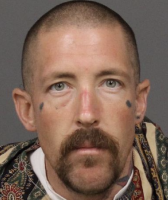 A San Luis Obispo woman awoke early Sunday morning to find a stranger inside her home, according to police.

At about 4 a.m., a woman called 911 saying an unknown man was inside her home in the 900 block of Lawrence Drive. The man was walking through the woman’s home and up the stairs toward the female’s location.

The woman yelled at the man, startling him. He then fled the home through the unlocked front door.

Officers located Dennis Hickey, 35, a short distance away from the home. Police arrested Hickey, of San Luis Obispo, for residential burglary, being under the influence of a controlled substance and violating parole.

Officers are reminding residents to lock their doors and windows, especially during the late night and early morning hours. Anyone who has additional information about Sunday morning’s incident is asked to call Officer Rouse at (805) 594-8050 or Crime Stoppers at (805) 549-STOP.