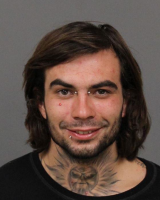 A San Luis Obispo man got into a fight with another male on Tuesday and allegedly stole the individual’s backpack and laptop before getting caught by police.

At about 6:50 p.m., an alert citizen witnessed two males fighting near the Rabobank on Broad Street. Officers arrived and found a male victim who said an individual he knew as “Alex Friend” stole his backpack and laptop, police said.

Friend had assaulted the victim, who suffered several scrapes.

An officer recognized the name of the suspect and knew the man to frequent the area around Mission Plaza. The officer then located Alexander Friend, 26, near Mission Plaza.

The officer some of the items stolen during the robbery with friend, who admitted to stealing the property from the victim.

Officers arrested Friend on a robbery charge and booked him into the SLO County Jail. Friend remains in custody with his bail set at $30,000.