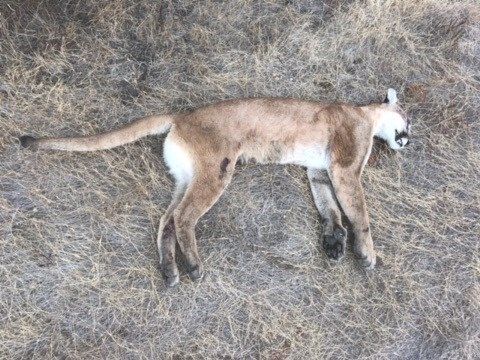 A mountain lion was found dead alongside Highway 1 in Cambria on Thursday after it was apparently struck by a vehicle.

Shortly before 8 a.m., a passerby reported seeing the dead mountain lion. California Department of Fish and Wildlife personnel then retrieved the carcass.

Investigators believe the mountain lion was struck by a car Wednesday night or early Thursday morning. The dead animal is described as a female “sub-adult” mountain lion that weighed about 50 pounds.

Fish and Wildlife personnel will perform a necropsy in attempt to determine the circumstances surrounding the mountain lion’s death.

Officials say several mountain lions have been struck and killed by vehicles on the Central Coast in recent months. Earlier this year, a mountain lion was killed near Cambria along Santa Rosa Creek Road, and earlier this week, one died after being hit in Monterey.

There have also been mountain lions caught on camera in recent months as they have been walking near SLO County homes.