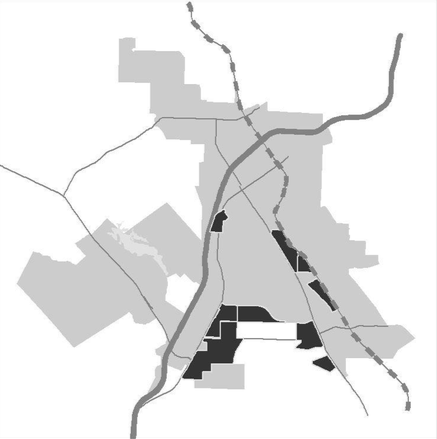 The city of San Luis Obispo is eying seven different areas to possibly place marijuana businesses, which would include a total of three brick and mortar pot shops.

SLO’s city council has already approved an ordinance allowing up to three brick and mortar dispensaries and allowing them to sell marijuana for recreational purposes. Other types of pot businesses, including delivery services and manufacturing operations, will also be permitted in the city, but the cannabis rules are conditional upon voters passing a marijuana sales tax in November.

On Tuesday, the city council voted unanimously to establish seven zones where marijuana businesses would be allowed to operate. The primary locations under consideration for marijuana retail stores are South Higuera Street near downtown, Broad Street on the southern side of town and the area near the airport. The four other zones are primarily under consideration for other types of pot businesses.

The seven zones approved for pot businesses are:

Mid-Higuera Area – a stretch along South Higuera Street between downtown and Madonna Road; where the city expects one of the three pot shops to be located.

Broad Street Corridor – along Broad Street on the southern side of town; where the city expects one of the three pot shops to be located.

Orcutt Road Area – essentially a continuation of the Broad Street Corridor farther to the south.

Airport Area – includes Tank Farm Road, South Higuera Street, Broad Street, Suburban Road and other streets near the airport; the city says this area has potential for being the location of a pot shop.

Current zoning does not allow for marijuana retail stores in the Orcutt Road, Margarita and Sacramento Drive areas. Also, the city cannabis ordinance requires storefront marijuana businesses to be located at least 1,000 feet apart from one another, 1,000 feet from schools and parks, 600 feet from daycare centers and 300 feet from residential neighborhoods.

City officials have expressed some concern that the amount of properties available for marijuana businesses within the approved zones is too limited. There could be stiff competition among applicants in securing a location for a potential marijuana business.

If voters approve the pot sales tax, marijuana businesses could open in San Luis Obispo as soon as early 2019.