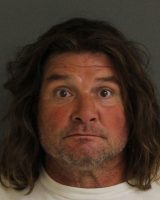 At about 10 p.m., Jacob Eddy, 51, entered his neighbor’s attached garage where a group of people were playing pool. Eddy took a pool cue from the victim, broke it in half and threw it at the person’s leg, officials said.

Eddy reportedly made threatening statements and then left the garage. Minutes later, the victim heard gunshots behind his home and saw Eddy holding a handgun in an alley.

Authorities sent out an emergency notification instructing residents in the area to shelter in place.

Deputies located Eddy inside his home and tried to establish contact with him on his cell phone. Eddy did not respond to the call.

But when deputies made announcements over a public address system, Eddy came out as instructed. 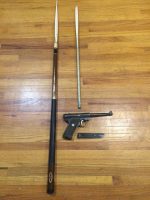 Just before midnight, deputies detained Eddy without incident. After deputies arrested him, Eddy became combative and made threatening statements to sheriff’s personnel.

The deputies conducted a protective sweep of the home to ensure no one else was inside and in danger. During the sweep, deputies noticed a handgun. They then obtained a search warrant and seized a .22 caliber handgun.

Deputies charged Eddy with making criminal threats, unlawful negligent discharge of a firearm, felony assault with a deadly weapon, brandishing a deadly weapon and vandalism. Eddy is being held in Santa Barbara County Jail with his bail set at $50,000.