San Luis Obispo Fire Chief Garret Olson will retire from the city’s fire department next month following six years with the agency, the majority of which he spent as chief.

Olson’s 30-year firefighting career was spent mostly in Arizona, where he rose up the ranks in different departments from firefighter/paramedic to deputy chief and chief. In 2001, Olson was deployed to New York to assist with the recovery from the Sept. 11 terror attacks. 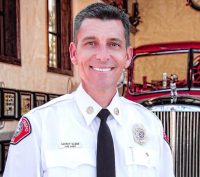 In 2011, Olson became chief of the Scottsdale Fire Department. The following year, he moved to SLO, serving initially as deputy chief. Then in 2013, Olson was promoted to SLO fire chief following the retirement of Charlie Hines.

Olson will officially retire on Oct. 30. Deputy Fire Chief Keith Aggson will then assume the role of interim chief.

“Our community has been incredibly fortunate to have a leader such as Garret, who has made immeasurable contributions to the safety of our community,” City Manager Derek Johnson said in a statement. “I couldn’t be more pleased with how the department has evolved and leadership Garret has demonstrated. With the recent completion of the five-year strategic plan, I feel confident in the future of the department.”

Olson said in a statement that he wishes he discovered SLO earlier.

“Serving this community has been the opportunity of a lifetime,” Olson said. “While I wish we had discovered SLO earlier in our lives, I believe my wife and I have an unsurpassed appreciation for this amazing community. I leave this long and wonderful career with a heart full of gratitude. It has been an incredible honor to serve. I look forward to many years of enjoying and giving back.”

Olson and his wife will continue to live in San Luis Obispo after the chief’s retirement.