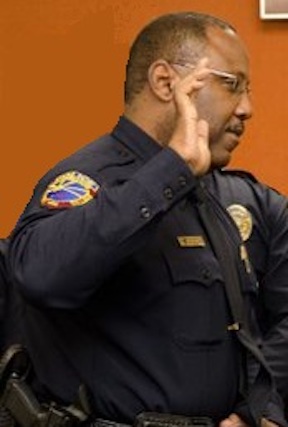 The Guadalupe City Council is considering hiring a controversial former campus police chief as the northern Santa Barbara County city’s top cop, a move that is drawing considerable criticism from members of the public.

The matter was initially agendized as a public hearing on approving a contract that would give Cash a $98,000 base salary to serve as the city’s public safety director. Following public criticism of the move in the lead-up to the meeting, the matter was changed to a closed session hearing. On Tuesday night, after meeting for multiple hours in closed session, the council said no reportable action occurred.

During Cash’s tenure as campus police chief, the college’s newspaper, The Sun, reported on a host of allegations levied against the law enforcement official, some of which appeared in lawsuits. The reports included allegations that Cash covered up sexual assaults, kept an inaccurate crime log and misused public funds.

In an incident for which Cash ultimately apologized, the then-college police chief discharged his gun in the police locker room, causing a bullet to go through a wall and into an occupied room. Cash was reportedly taken to the hospital following the incident after he exhibited shock-like symptoms.

It is unclear whether or not investigators determined the shooting to be accidental. Cash was placed on leave following the incident, but later returned to work and penned an apology letter to the college campus that was published in the Sun.

Prior to serving as the chief of the community college police department, Cash worked for the San Diego Police Department, as well as for the San Diego Chargers. The Sun reported that the Chargers fired Cash following an incident in which players violated team rules.

Before Tuesday’s meeting, Guadalupe Councilwoman Gina Rubalcaba defended the plan to hire Cash, stating on Facebook that it is frustrating people want to believe newspapers in an era in which reporting has become one-sided and opinionated, rather than factual.