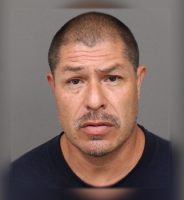 In Dec. 2016, Jose Diaz was staying at a home in which the then 7-year-old victim and other relatives were living, according to the San Luis Obispo County District Attorney’s Office. While the child’s mother was at work, Diaz took the victim and her cousin to a nearby store. He touched the victim inappropriately.

Investigators later determined Diaz had touched the victim in a similar manner the day prior while the family attended the Vine Street Parade in Paso Robles. Additionally, during a two-week trial, prosecutors presented evidence of a prior uncharged incident of child molestation.

Following just two hours of deliberation, the jury convicted Diaz of two felony counts of committing a lewd act on a child under the age of 14 and one misdemeanor count of child molestation.

“Crimes against children are particularly heinous and our office stands ready to aggressively prosecute such offenses to the best of our ability,” District Attorney Dan Dow said in a statement following the verdict. “We are proud of this young victim’s courage in coming forward and reporting this crime. We thank the jury for their focused attention in hearing this startling case and are optimistic that the verdict will bring some level of justice to the young victim and her family.”

Diaz’s sentencing is scheduled for Oct. 30 in the courtroom of Judge Jesse Marino.