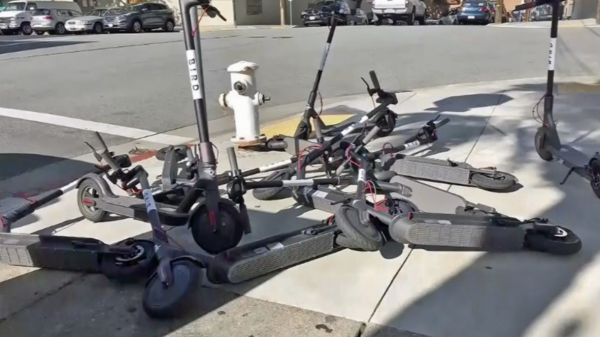 The Pismo Beach City Council will consider on Tuesday whether to adopt an urgency ordinance that would ban scooter sharing programs.

Citing public safety and nuisance concerns, Pismo Beach city staff is recommending the council adopt an ordinance that would preempt motorized scooter sharing systems from being implemented in the South County city. Thus far, motorized scooter sharing programs have been introduced in more than 70 cities across the country, including San Francisco, San Diego and Santa Monica, a Pismo Beach staff report states.

Companies have developed mobile apps that allow individuals to rent scooters and leave them behind at their end destination. Pismo Beach officials say one company is currently trying to operate in San Luis Obispo and Santa Barbara counties.

Motorized scooters can travel up to 15 mph and are often used on sidewalks, the Pismo Beach staff report states. Riders often do not wear protective gear.

Pismo Beach staff is warning about the possibility of overnight implementation in which scooters are left in various places around a city without any warning and without obtaining any permitting or licensing. Staffers also say riders often leave scooters scattered around public and private property, creating hazards for pedestrians and wheelchairs users, as well as a public nuisance.

City staff is asking the council to adopt an urgency ordinance that would ban shared scooter programs and allow Pismo Beach officials to penalize the operators of such systems. Additionally, the ordinance would allow the city to remove and impound scooters that are illegally parked or are creating a public nuisance.

A four-fifths vote is needed for the urgency ordinance to pass.