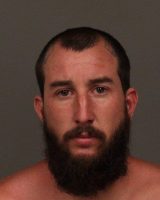 A man suspected of belonging to a motorcycle gang allegedly fired shots at a person with whom he was fighting outside an Atascadero bar early Wednesday morning.

The shots came close but did not hit the victim, according to the Atascadero Police Department. Hours later, police tracked down the alleged gunman and arrested him, as well as a female associate.

At about 1:30 a.m., a physical fight broke out behind Whiskey & June at 5950 El Camino Real. An Atascadero man later identified as Travis William Miller, 38, retrieved a handgun from his vehicle, pointed the firearm at the victim and fired a single round, a police department press release states. 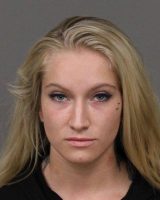 At 11:51 a.m., officers located a black truck at Olmeda and Rosario avenues. Miller was a passenger in the truck.

Officers followed the truck and made a “high-risk stop” of the vehicle by Stow It Mini Storage. Officers arrested Miller and his associate, 23-year-old Nevada Skye Jones, of Atascadero, and booked them in SLO County Jail.

Both Miller and Jones remain in custody with their bail set at $50,000. Police are recommending prosecutors file charges of assault with a deadly weapon and conspiracy.

An investigation into the case is ongoing. Police are still trying to locate evidence and confirm Miller’s gang involvement.