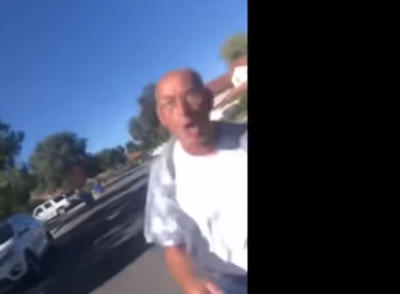 Late last month, Isaac Schick, 21, knocked on the home of Bart Charles on Bel Air Place in Paso Robles. Schick then informed the man who opened the door that he was conducting a poll on behalf of the Justin Fareed for Congress campaign.

“He called Fareed a racist and a fascist and began screaming and cursing,” Schick said. “I began walking away and he went after me.”

When Schick got to the sidewalk, he pulled out his phone and felt a fist on his back.

“He yelled you’re “F-ing” creep and hit me in the back,” Schick said. “I began to run and I started recording.”

The man then continued to chase Schick, stopping after he noticed he was being recorded.

“Because your lying,” the man said in response to Schick asking him why he was attacking him.

Fareed’s campaign has denounced the violence and blamed it on members of the Democratic leadership.

“In the last few weeks, Democrat leaders have ratcheted up calls for violence, taking the political climate to a new low,” Fareed’s campaign said in a press release. “Former Attorney General Eric Holder recently inflamed the rhetoric by inciting activists by saying, ‘When they go low, we kick!’ Representative Maxine Waters called for people who encounter Republicans to ‘push back on them, and you tell them they’re not welcome.’ “