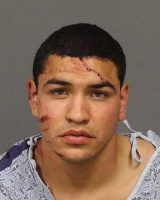 An Arvin man convicted of manslaughter in the case of a DUI crash on the Cuesta Grade that killed a 16-year-old girl received a prison sentence of 13 years and eight months on Monday.

On April 15, 2016, Gino Lopez, 23, was driving at high speeds southbound on Highway 101 toward San Luis Obispo. Just south of TV Tower Road on the Cuesta Grade, Lopez performed a turning maneuver that sent his 1994 Honda Civic into the guardrail and into another vehicle.

Lopez’s Honda was then struck by a third vehicle, causing one of his passengers, Emily Monique Reyes, to be ejected from the car. Reyes, a Grizzly Academy graduate who had planned to join the U.S. Marine Corps, died of her injuries. Lopez’s other passengers were injured but survived.

Following the crash, Lopez and one of his passengers fled the scene. Witnesses also testified that they were throwing beer cans out of the Honda.

Officers arrested Lopez after finding him walking along a hillside with the passenger who also fled. Lopez was reportedly found to have been driving with a blood alcohol level of at least .10.

Prosecutors charged Lopez with murder because of a state law requiring DUI offenders to agree that if they drive under the influence again and a person dies as a result of it, they may face a second-degree murder charge. Lopez was convicted of misdemeanor DUI in Kern County about nine months before the fatal crash on the Cuesta Grade.

Following a trial in San Luis Obispo Superior Court, jurors failed to reach a verdict on a charge of second-degree murder. The jury convicted Lopez of gross vehicular manslaughter while intoxicated with an enhancement for fleeing the scene of the crime. Jurors also convicted Lopez of leaving the scene of an accident and driving under the influence of alcohol with an enhancement for causing great bodily injury to more than one victim.

Had the Arvin man been convicted of second-degree murder, he would have faced 15 years to life in prison just for that count. Nonetheless, Lopez faced more than 15 years behind bars for the counts on which he was convicted.