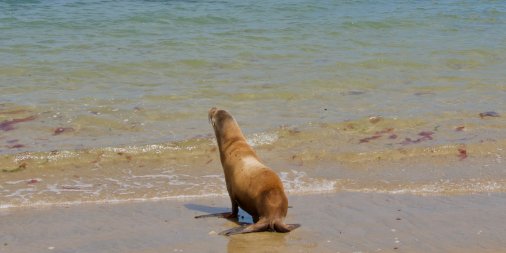 The outbreak of a potentially fatal bacterial infection is causing some sea lions to curl up in a fetal position on California beaches, including on the Central Coast.

Recently, there has been a surge in cases of California sea lions contracting leptospirosis, a bacterial infection that affects the kidneys and can be lethal, according to the Marine Mammal Center. The rescue center says the current outbreak is the second largest on record for California sea lions.

Thus far, 220 sea lions have tested positive for the potentially fatal bacterial infection. Of that total, 16 of the infected sea lions have been located on the Central Coast.

During the last major outbreak, which occurred in 2011, nearly 200 infected sea lions were admitted to the Marine Mammal Center’s hospital. The rescue center treats and releases the sea lions.

Leptospirosis is caused by spiral-shaped bacteria called Leptospira. Veterinarians can usually identify leptospirosis prior to laboratory tests confirming the diagnosis because the infection results in distinctive symptoms in California sea lions, including drinking water and folding their flippers over their abdomens.

If the bacterial infection is not treated, it can cause irreversible kidney damage.