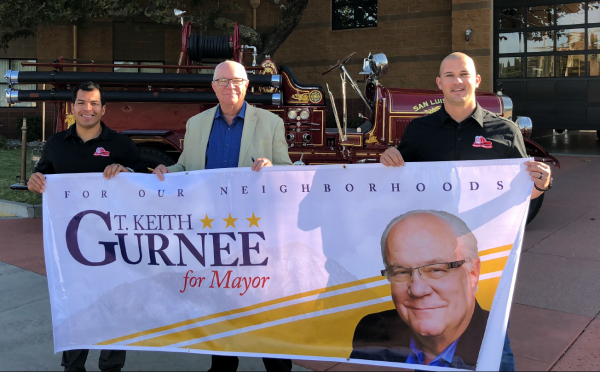 Members of the San Luis Obispo City Firefighters union voted unanimously to endorse Keith Gurnee for mayor. In their endorsement, firefighters touted Gurnee’s support of public safety during his previous term on the SLO City Council.

“The decision to endorse Keith Gurnee for mayor was made unanimously by the entire group,” said Armando Gutierrez, the Local 3523 president. “Keith demonstrated unwavering support of public safety during his time on the City Council and we are confident he will continue his commitment as mayor.”

Prior to his current bid for mayor, Keith Gurnee served on the SLO City Council and was influential in preserving open space including Bishop Peak and Varian Ranch and restoring the Park Hotel.

“President Gutierrez and the Firefighters Union represent a vital portion of our population,” Gurnee said. “There is no higher purpose in local government than protecting public safety. These dedicated men and women who protect our communities deserve our support. I am extremely honored to have received SLO City Firefighters Local 3523’s endorsement.”