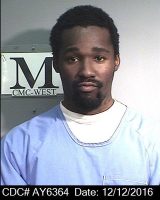 A week after an inmate escaped the California Men’s Colony, possibly using a prison vehicle as a getaway car, authorities still have yet to capture the fugitive.

On the morning of Oct. 30, prison staffers determined minimum-security inmate David Grey Hall, 26, was missing, as was a state-owned van. Hall was assigned as a worker in the Men’s Colony garage, according to the California Department of Corrections and Rehabilitation.

Minutes following the escape, prison officials deployed search teams and alerted state and local law enforcement, including the CHP, which assisted in the search for Hall. It is unclear if authorities have located the missing vehicle, a white 1997 Ford Aerostar van with California license plate number E431260.

Hall is African American with black hair and brown eyes. He is 6 feet tall and weighs 184 pounds. Hall may have been wearing a lime green jumpsuit when he escaped.

After being convicted of second-degree burglary in Los Angeles County, Hall was admitted to the Men’s Colony on Dec. 22, 2015. He was serving a five-year sentence and was scheduled to be released to parole in Dec. 2019.

Prison officials say, since 1977, 99 percent of inmates who have escaped an adult institution, camp or community-based program have been apprehended.