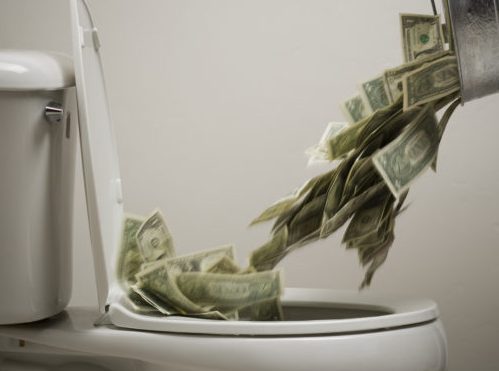 For more than a year, reporters have used the Public Records Act to ask for the IWMA’s credit card monthly statements. Something government officials appeared to have tried to conceal. After months, a small portion of the request was provided earlier this year.

Recently, it was discovered that credit card receipts for 2012 through 2016 were at the home of IWMA board member and Grover Beach Councilman Jeff Lee, who has since returned the records back to the agency, according to staff.

In 2012, Congress passed The Government Charge Card Abuse Prevention Act, requiring safeguards for government credit cards. Unfortunately, the law’s been pretty ineffective when it comes to the IWMA’s credit card use.

Meanwhile, the people of SLO County have paid for government employee’s and a contractor’s personal expenses through their monthly trash bills.

Following the announcement of a criminal investigation of the IWMA by the SLO County District Attorney’s Office, IWMA Administrator Bill Worrell stepped down. Since then, monthly credit card bills that previously ran up to $14,697 a month fell dramatically. In September, the bill was $322. In both October and November, the IWMA charged $15.99 on its credit card.

1) IWMA employees paid some of their personal utility bills.

For about six years, the credit card was used to pay multiple AT&T phone bills totaling about $1,300 a month. However, the IWMA does not use AT&T for their phone service.

One of the monthly phone bills was for a landline in Paso Robles in the name of Steven and Carolyn Goodrich. Goodrich works as an employee of the IWMA.

The IWMA office in SLO is powered through solar, lowering its electric bill to about $10 a month, according to IWMA financial records. The IWMA credit card has been regularly used to pay electric bills which appear not to be related to the IWMA. For example, the card paid a $146.94 electric bill and a $125.87 electric bill in January 2015.

Even though the IWMA is housed in a small building in SLO, the IWMA card was regularly used to purchase items from home décor stores, hardware stores and for landscaping. In just two months in late 2015 and early 2016, those purchases totaled more than $14,700, according to monthly charge card records.

Worrell traveled almost monthly on the government credit card. While overseas, the card was used to shop at women’s clothing stores and to purchase foreign currency, according to monthly charge card records..

5) A family member of a former contractor also used the IWMA credit card.

On Oct. 11, 2017, Maurice Tenborg, the brother of Charles Tenborg, used the IWMA credit card to purchase a 60-inch by 84-inch steel floor for $678.24 from B & B Steel and Supply in Santa Maria, according to store staffers. Both Worrell and Charles Tenborg testified in court that Tenborg had not worked at the IWMA since 2014.