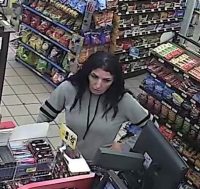 San Luis Obispo County Sheriff’s detectives are searching for two women suspected to have used a stolen credit card at stores across SLO County, costing the owner of the card an estimated $5,000.

Investigators eventually determined the credit card had been used the same day at a Shell gas station in Atascadero; the Target and Apple stores in San Luis Obispo; and Pac Sun, Perfumania, Coach, Zumiez and Vans in the Pismo Beach outlet center. Detectives obtained surveillance images of two female suspect, as well as a vehicle in which they appeared to be traveling. 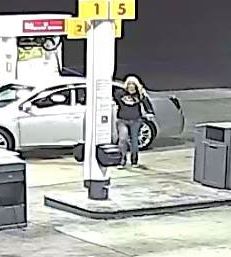 Sheriff’s officials described one suspect as a middle-aged white female who is approximately 5 feet 4 inches tall with long black hair, who was wearing dark blue jeans and a long sleeved gray hooded sweatshirt with two black horizontal stripes on the sleeve. Officers describe the other suspect as a white female, about 5 feet 7 inches tall, with a heavy-set build and blond hair.

The suspects’ vehicle is a newer model silver colored four-door Cadillac. Police are asking anyone with information about the suspects to call sheriff’s detectives at (805) 781-4550.