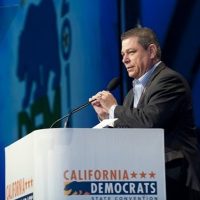 The openly gay chairman of the California Democratic Party is facing allegations of sexual assault or harassment of staff members, accusations lodged by the party’s third-in-command. [SF Chronicle]

On Saturday, party Vice Chairman Daraka Larimore-Hall sent an email to the state party executive board stating there are “credible, corroborated and utterly heart-breaking allegations” against Chairman Eric Bauman. Larimore-Hall said he was approached by a number of party staff members who said they had been sexually assaulted or harassed by Bauman at party functions.

Many of the alleged victims are at the very beginnings of their carers, Larimore-Hall stated in the email. The email did not include any details about the alleged incidents.

Larimore-Hall is calling for the state party to remove Bauman from his position. Bauman is calling for an independent investigation into the allegations.

“I take seriously any allegation brought forward by anyone who believes they have been caused pain,” Bauman said in a statement. “Procedures are in place to handle these matters, and independent counsel will ensure that they are followed. I look forward to putting these allegations behind us and moving forward as unified Democrats.”

Bauman was narrowly elected chairman of the state party in 2017, defeating community organizer Kimberly Ellis, who appealed to the progressive wing of the party. Bauman is the former head of the the Los Angeles County Democratic Party and is viewed as an establishment Democrat.

Following the disclosure of the allegations, California Congressman Ro Khanna (D-Fremont) called for the state party to replace Bauman with either Ellis or Michele Dauber, a Stanford law professor who spearheaded a campaign to recall a Santa Clara County judge who sentenced a Stanford athlete to six months in jail for sexually assaulting and attempting to rape an unconscious woman.