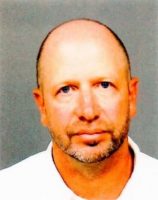 A Canadian pastor is currently standing trial in San Luis Obispo County Superior Court for allegedly trying to meet a minor for sex, a charge that came as a result of a sting operation conducted by Arroyo Grande police. [Tribune]

This year, Arroyo Grande police have made an effort to catch adults who use the internet to seek sex with underage girls. In July, officers arrested a Grover Beach man who allegedly tried to solicit sex from a 15-year-old girl he met online, who was actually an undercover cop. The following month, Arroyo Grand police arrested Nathan Rieger, 53, in a nearly identical scenario.

Prior to his arrest, Rieger was a pastor at the Winnipeg Centre Vineyard Church. He resigned following his arrest on Aug. 10 in a parking lot on West Branch Street, where he allegedly planned to meet an underage girl.

Rieger’s trial, which is garnering coverage in Canadian media, began Wednesday with opening statements. On Thursday, James Jolly, the Arroyo Grand police detective who was posing as the underage girl, took the witness stand.

Jolly testified he chatted online with Rieger under the guise of being a 15-year-old girl. The online chat lasted over the course of a week in early August.

Reiger was using the name “Anon” while communicating with the supposed girl, Jolly testified. The detective did not state the online platform on which they were communicating.

The 53-year-old pastor stated during the chat that he was 37 years old. He began the conversation with comments, like “you’re beautiful” but soon started asking about turn-ons and prior sexual encounters, Jolly testified.

Eventually, Rieger stated he wanted to introduce the supposed girl to “new pleasures,” as well as more sexual comments, like that he was an “experienced Dom” and that sex is “much nicer without a condom.”

During the conversation, Jolly repeatedly reminded Rieger that the supposed girl was 15, and she was not old enough to drink and that she had to sneak out of her grandmother’s house in order to meet.

Rieger allegedly wrote, “My career could be at stake because of your age.” He also allegedly stated that he knew the age of consent is 18, but he still thought he wanted to be with the girl.

At one point, Rieger allegedly wrote he had been “catfished before” and requested that the supposed girl send another photo, this time with her touching her nose to ensure he was talking to a real person. Jolly produced the photo, after which Rieger allegedly stated all of his doubts were gone, and “let’s do this.”

Rieger has pleaded not guilty to a felony count of meeting with a minor for lewd purposes. His trial is ongoing.