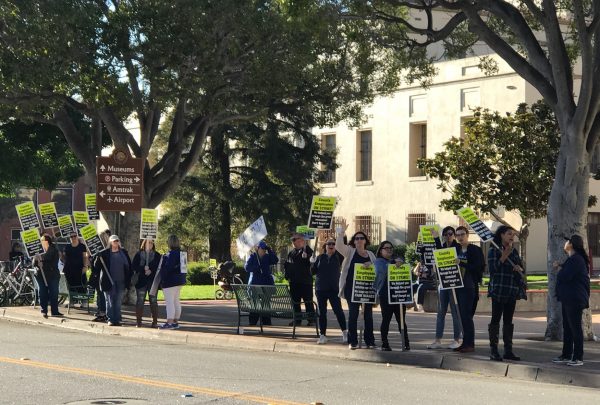 A group of striking San Luis Obispo County government workers claimed Tuesday they do not make livable wages, yet many, if not most, of the employees currently on strike collect between $50,000 and $100,000 in annual pay plus five-digit benefit packages.

On Tuesday, the first day of a three-day strike, San Luis Obispo County Employees’ Association (SLOCEA) members picketed outside the county building. Dozens of union members packed the board of supervisors chamber, where some held signs and spoke during public comment.

Some speakers cried as they discussed their financial hardships and asked for higher pay. Several speakers said they are currently on Medi-Cal, and one said she is in Section 8 housing, raising questions as to whether the workers are giving factual public testimony or possibly providing false information when applying for government assistance.

“Very much pride and humility to admit the fact that even after a five-year (employment), me and my two children, we still qualify for Medi-Cal and Section 8,” Cassandra DeSpain, a county employment/resource specialist, said during public comment. “If my wages were fair living wages, there is absolutely no reason I should qualify for those programs.”

In order to qualify for Section 8 housing in SLO County, a three-person household must have a gross income of no more than $37,450, according to the HUD income limits listed on the Housing Authority of San Luis Obispo’s website.

Cal Coast Times reviewed the pay received by about half of the county workers who spoke during public comment at the board of supervisors meeting. Of those employees, in 2017, most received pay of more than $50,000. On the low end, one worker was paid only $44,200 while receiving $59,448 in total compensation.

When factoring in overtime and other pay, as well as benefits, multiple individuals who spoke during public comment receive more than $100,000 annually in total compensation.

“We are underpaid,” Mee said during her public comment. “You took away our callback time.”

Mee, as well as other social workers, criticized the county for reducing the amount of pay they receive for answering the phone during on-call overnight shifts. The social workers contend they are not fairly compensated for getting woken up at night, sometimes repeatedly, before going to work the next morning.

As a result of the strike, the county has temporarily shuttered all public library branches in the county, and multiple mental health services are either shutting their doors or cutting their hours of operation during the strike. On Tuesday, multiple library workers and social services employees spoke during public comment.

“We do not feel valued,” said Mary Blair, a library branch manager. “They started off offering us zero. It is not being part of a team.”

In support of the strike, union members said they are vastly underpaid compared to government workers in comparable counties as documented in a third-party fact finder report. The report recommended the county give SLOCEA members a 3 percent raise.

However, critics say SLOCEA members are overpaid compared to private sector workers, and the constant wage comparisons to other county governments are driving up government employee salary and benefit costs at a time SLO County is facing more than $360 million in unfunded pension liabilities.

Prior to Tuesday’s board meeting, SLO County officials said 3 percent raises were not affordable. However, public statements made by striking workers appear to have garnered sympathy from board members.

All four supervisors in attendance at Tuesday’s meeting said they are willing to meet with union members to discuss their concerns. Supervisor Lynn Compton was absent on Tuesday because of a family emergency

“We will move forward together,” Supervisor Bruce Gibson said.

“It’s painful, to be honest with you,” Hill said to KSBY. “I don’t think that we have been fully aware of how difficult it is on many of our employees.”

A review of the individual supervisors’ pay shows Hill receives the highest total compensation, slightly more than Gibson and more than $40,000 above Supervisor John Peschong, who accepts the smallest benefits package of the five board members.

In 2017, Hill received $141,229 in total compensation, of which benefits accounted for $48,543. Hill has received more than $40,000 in benefits each of the last four years, as has Gibson, who has collected slightly less than Hill.

At the other end, in 2017, Peschong received $100,820 in total compensation, of which benefits accounted for $18,348. During Tuesday’s board meeting, Peschong said he knew many of the comments made by county workers came from the heart.

Supervisor Debbie Arnold, the median benefits collector among board members, said everyone on the dais would like to meet with employees to discuss their concerns.

Following the meeting, Arnold voiced concerns about the county fiscal woes, including a current budget deficit of more than $4 million and the ongoing costs of increased compensation. Since 2014, the county has paid out more than $40 million in overall compensation increases, Arnold said.

One Comment about “Are some SLO County workers exaggerating their financial hardship?”