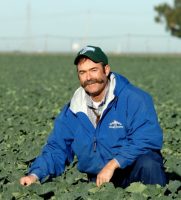 Federal investigators have traced a nationwide E. coli outbreak involving contaminated romaine lettuce, in part, to a Santa Maria farm that is owned by the family of Santa Barbara County Supervisor Peter Adam.

Between Oct. 5 and Nov. 16, 59 people across 15 states were infected with the outbreak strain of E. Coli 0157: H7, according to the Centers for Disease Control and Prevention (CDC). A total of 23 people have been hospitalized, including two who developed hemolytic uremic syndrome, a type of kidney failure. No one died because of the E. coli outbreak.

A sample from an irrigation reservoir at Adam Bros. Family Farms reportedly tested positive for the outbreak strain of E. coli. It is unclear how the reservoir became contaminated.

Adam Bros., for which Supervisor Adam serves as vice president, responded by recalling red and green leaf lettuce and cauliflower that was harvested between Nov. 27 and Nov. 30 because the produce may be contaminated with E. coli. The farm recalled the produce out of an abundance of caution, and none of the recalled products had tested positive for E. coli, Adam Bros. stated in a press release.

The Santa Barbara County company has notified affected customers of all products that were recalled and asked that the produce not be eaten, sold or transferred. Additionally, Adam Bros requested that its customers notify the downline chain to ensure a complete recall.

CNN reports the FDA does not believe Adam Bros. is the only location involved in the E. coli outbreak. An investigation has thus far identified 11 distributors, 9 growers and 8 farms as potential sources, said Dr. Stephen Ostroff, a senior advisor to the FDA commissioner.

Amid the E. coli outbreak, the CDC has warned customers to not eat and restaurants and retailers to not serve or sell any romaine lettuce harvested in Monterey, San Benito and Santa Barbara counties. Last month, Monterey County Agricultural Commissioner Henry Gonzales said the contaminated lettuce most likely came from Monterey County and possibly San Benito County since the dates of the reported cases of E. coli infections corresponded with romaine lettuce season in the two counties.

Many of the individuals infected with E. coli ate more than one meal containing romaine lettuce at a number of different restaurants, further complicating the trace-back investigation, the CDC said.

Anyone who develops these symptoms is instructed to contact a healthcare provider. Antibiotics are generally not recommended for E. coli 0157 infections.