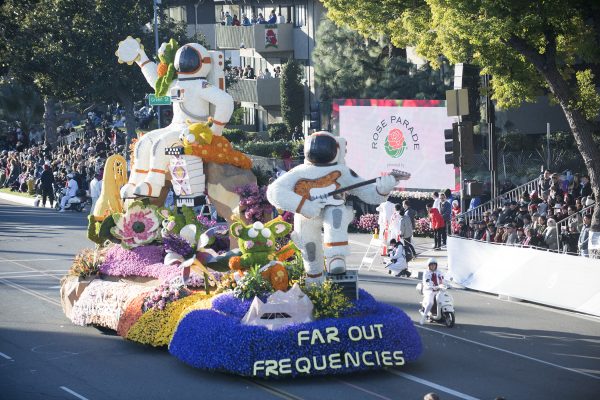 The Cal Poly Universities Rose Parade entry, Far Out Frequencies, makes its way along the parade route in Pasadena January 1, 2019.

Cal Poly universities’ float, featuring a pair of astronauts and a handful of animated extraterrestrials on an alien planet communicating through music, received the Extraordinaire Award for the most extraordinary float at the 130th Rose Parade held New Year’s Day.

The float was designed and built by teams of students from Cal Poly in San Luis Obispo and California State Polytechnic University in Pomona. It is the fourth time in 71 appearances that the Cal Poly float has featured a space-related design.

“It’s the first time we’ve every gotten this award, so we’re really excited about it,” said Sara Novell, a mechanical engineering senior who’s president of Cal Poly SLO Rose Float. “I am so excited and just so proud of my team. We did build an extraordinary float from an extraordinary team of students from both campuses. It was just a culmination of all of our collaborations, teamwork and honestly, I wouldn’t expect anything less from this team.”

On the float, astronauts Morgan and Sally travel deep into outer space and land on a distant alien planet. Unable to communicate through language, they use musical instruments to share their message of goodwill with a handful of aliens, leading to out-of-this-world fun and some unexpected good times.

“The Cal Poly Rose Float is Learn by Doing on an international stage — one of our most well-known student-designed and -built projects,” said Cal Poly President Jeffrey D. Armstrong, who was in Pasadena to watch the parade. “Our extended Mustang family of alumni, family and float fans gush with Cal Poly pride over the hard work that transformed a drawing into a larger-than-life colorful spectacle.

“We know the Rose Parade’s worldwide audience appreciates the students’ creativity and workmanship. I also hope viewers see this float as a metaphor for what Cal Poly students bring to the world: leadership, technical precision, ability to solve problems, and an uncompromising work ethic and zest for life.” 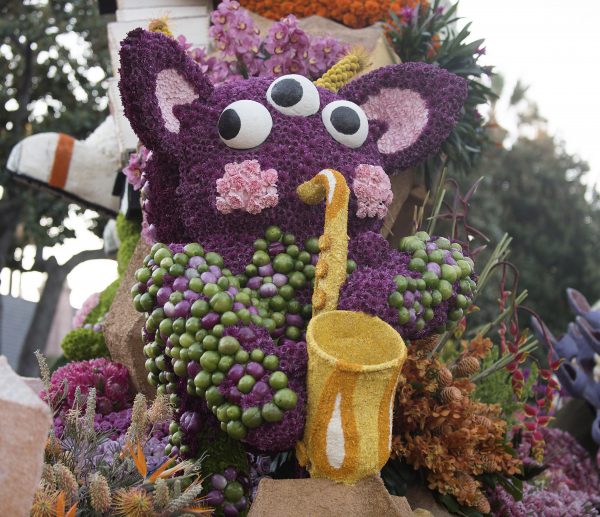 Cal Poly’s “Far Out Frequencies” was among 40 floats in this year’s parade. Rose Parade officials estimate that 700,000 people see the parade in person, while 44 million Americans and an international audience of 28 million tune in to watch it on TV.

The 49- by 15-foot entry, which stands more than 16-feet tall, uses animation to breathe life into this outer space close encounter.

“The front astronaut strums a guitar, bobs his head and taps his foot,” Novell said. “The alien next to that astronaut mimics the guitar strumming motion. All the aliens have moving ears. On the rock arch, two aliens play with an accordion — one on each end — which moves.

“The back alien will rock its legs as well as move its wrist to shake a tambourine. On the back of the float, another alien lifts a tuba off its head. There also will be bubbles coming out of the saxophone that an alien plays. Lastly, one of the flowers spins.”

The concept was selected from more than 150 ideas submitted last spring by students, local communities, alumni and friends of the Cal Poly Rose Float program.

During the recent Decorations Week in Pasadena, the float was adorned with thousands of colorful blooms — including 7,000 roses, 7,200 Gerbera daisies, 3,200 irises and 200 red cabbages as well as white cushion mums, and button mums. 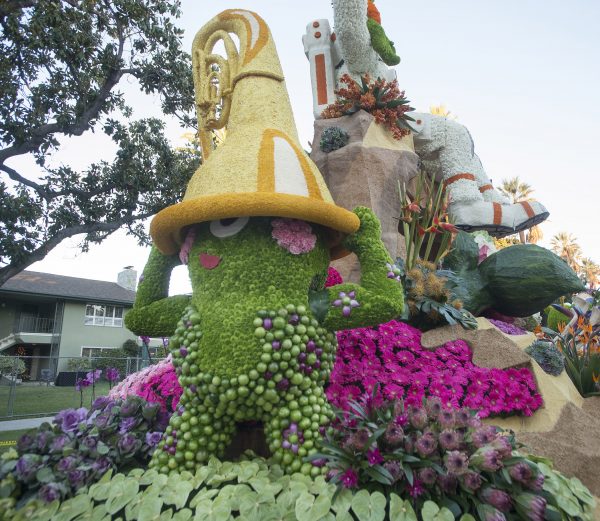 An alien struggles to remove a tuba from his head on the Cal Poly Universities float, Far Out Frequencies.

The schools were also honored for their commitment to California’s flower farmers.

Since the fall of 1948, students from San Luis Obispo and Pomona have come together across 240 miles to produce the float — one of only six self-built entries — for Pasadena’s signature event. Since then, the two schools’ entries have earned more than 50 awards, including the 2018 Past President award honoring the most outstanding innovation in the use of floral and non-floral materials.