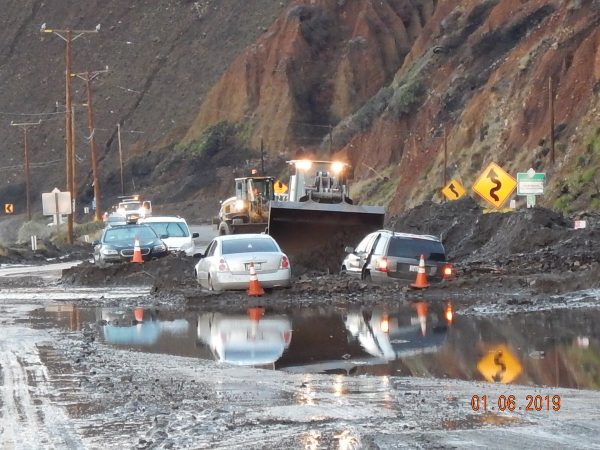 A storm brought heavy rain over the weekend to some parts of the Central Coast, including areas in San Luis Obispo County, and resulted in the closure of two stretches of Highway 1.

Over the last 24 hours, areas in SLO County received approximately .1 to 3 inches of rain, with particularly heavy rainfall in Santa Margarita. Most of South County and North County received light rainfall.

The monitor at Rocky Butte near San Simeon, as typically occurs, recorded the most rainfall in the county — 2.92 inches. Santa Margarita received 2.72 inches over the last 24 hours.

Meanwhile, Highway 1 is closed just north of SLO County as a result of rocks falling on the highway south of Big Sur. Highway 1 was closed overnight from Ragged Point north to Deetjens, according to Caltrans.

To the south, in Ventura and Los Angeles counties, Highway 1 is also closed along a stretch called Pacific Coast Highway that was hit by mudslides. The highway is closed from Encinal Canyon Road in Malibu to Las Posas Road near Point Mugu, according to Caltrans.

Forecasts call for a cumulative rainfall total of between six and eight inches through Jan. 15 for most of the Central Coast, with 10 or more inches along the Big Surface coastline, according to PG&E’s John Lindsey. The rains will put a huge dent in the current drought, Lindsey said in a tweet.