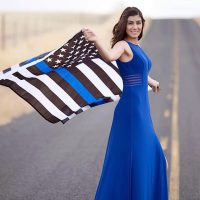 At about 7 p.m. on Thursday, Davis Police Officer Natalie Corona, 22, arrived at the scene of a three-car crash. While Corona was investigating the crash, shots were fired and the she was struck, according to the Davis Police Department.

Firefighters at a nearby station provided immediate medical help before Corona was rushed to the UC Davis Medical Center. Corona died at the hospital.

Following the shooting, officers launched a manhunt for the gunman in downtown Davis. A standoff ensued at a home near 5th and E streets.

Eventually, officers found the suspect dead inside the home from a self-inflicted gunshot wound. Authorities have yet to released the identity of the deceased suspect.

A possible motive for the shooting is also unclear. The Sacramento County Sheriff’s Department has taken over as the lead agency in the investigation.

Corona was a rookie officer who joined the Davis Police Department in 2016 as a community service officer and completed her field training just last month. Corona had worked in volunteer and part-time roles prior to becoming a full-time police officer.

“She was a rising star in the department,” Davis Police Chief Darren Pytel said at a press conference Thursday night.

During the search for the suspect, authorities issued a shelter in place order for the UC Davis community and local residents. Police escorted students to their dorms and from various buildings on campus, according to a UC Davis alert.