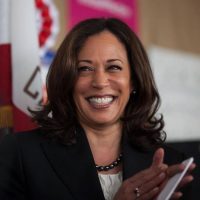 California Sen. Kamala Harris formally jumped in the race Monday for the 2020 Democratic nomination for president of the United States.

Harris, a first-term United States senator and former California attorney general, announced her run for president on the ABC show Good Morning America. She is expected to deliver a speech announcing her candidacy on Saturday in Oakland, the city in which she was raised.

For two decades, Harris worked as a prosecutor in California, serving as the San Francisco district attorney prior to getting elected attorney general in 2010. Harris was elected to the Senate in 2016, in the middle of her second term as attorney general.

Though Harris has criticized law enforcement and the United States justice system for having racial bias, she has faced criticism from progressives and advocates of criminal justice reform for her work as a prosecutor, leading some to question whether she can secure the Democratic nomination. Harris has responded to the criticism from progressives by saying the left needs to get over its bias against law enforcement.

“I think it is a false choice to suggest that communities don’t want law enforcement,” Harris said Monday on Good Morning America.

When asked about the general sentiments of Americans, Harris spoke about the economic hardships faced by workers, particularly federal employees impacted by the current government shutdown.

“Those folks don’t want a wall. They want a paycheck,” Harris said of the federal workers foregoing pay.

Harris, whose parents met in Berkeley during their involvement in the Civil Rights movement, announced her presidential campaign on Martin Luther King Jr. Day. Harris is the child of two immigrants, as her mother was born in India and her father in Jamaica.