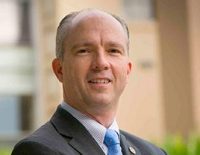 A San Luis Obispo judge ruled Thursday that SLO County District Attorney Dan Dow’s prosecution team violated the law when it withheld a state crime lab report that found DNA from a person other than the defendant on the breast of the alleged victim in a Cambria sexual assault case. [Tribune]

Herbert George Connor, 72, is currently standing trial over an incident in which he allegedly forced himself on a 67-year-old woman, groped her and caused her to fall into a door jamb while she tried to escape. Connor and the woman previously had a sexual relationship, though there are conflicting accounts to the nature of their encounters.

Dow, in a rare move for a sitting district attorney, is personally prosecuting the case, having taken it on after his underlings planned to drop the charges because of a perceived lack of conclusive evidence. One of the charges in the case stems from Connor’s alleged contact with the woman’s breast.

Following the alleged sexual assault, the woman submitted several oral and and body swabs as part of an initial sexual assault exam. The swabs went to the California Department of Justice crime lab in Goleta, which completed a DNA test report in June 2017, according to a statement filed by Dow.

Dow stated he was not aware of the DNA test until Tuesday, when after the trial recessed for the day, Sheriff’s Detective Devashish Menghrajani called him. Menghrajani informed Dow that, while preparing for his testimony, he discovered that he had never sought the results of the state DOJ crime lab test.

Duffy granted motions by Connor’s attorney, Ilan Funke-Bilu, requesting an additional jury instruction about the DNA evidence and that the defense, not the prosecution, be allowed to call the crime lab’s forensic technician to testify. Duffy also granted a motion allowing Funke-Bilu to deliver an approximately five-minute addendum to his opening argument about the technician’s expected testimony.

It appeared Duffy was open to hearing an argument for a mistrial. However, Connor requested that the trial continue because he does not have the money for legal defense in a second trial.

In arguments over the DNA test report, Dow claimed it was inconclusive and of little value. Funke-Bilu argued the person whose DNA was found on the alleged victim’s breasts may have had physical contact with the woman at about the same time the alleged assault occurred.

Connor is charged with felony counts of assault with intent to commit rape and sexual battery and a misdemeanor count of inflicting corporal injury. He faces a maximum sentence of seven years in prison if convicted of all charges.

Last week, the trial was set back two days after Duffy ruled Dow trivialized the standard of reasonable doubt in his questioning of prospective jurors. The mishap resulted in the dismissal of the entire jury panel.

Testimony in the case will resume Friday.