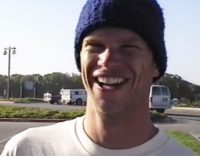 A former pro surfer who was found dead on a Santa Barbara beach last month fell off a cliff while high on methamphetamine and then drowned, according to the Santa Barbara County coroner’s report.

Chris Brown, 48, was under the influence of a high level of methamphetamine when he fell off the cliff, suffering blunt force trauma. Authorities found Brown’s dead body on Jan. 19, just above the shoreline about a mile away from Hendry’s Beach.

At the age of 17, Brown won the juniors division of the 1988 World Amateur Surfing Championships held in Puerto Rico. He turned pro shortly thereafter and was one of a few surfers who could challenge Kelly Slater, now widely considered the best competitive surfer in history.