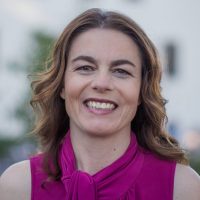 Morro Bay Councilwoman Dawn Addis spoke out at a meeting Wednesday about vulgar emails she received from a constituent, who apparently sent angry emails to other council members as well.

Addis, a leader of the Women’s March San Luis Obispo, was recently a victim in a court case in which a man was convicted of making criminal threats for sending threatening Facebook messages to the local activist group. Another criminal case could now arise over the emails sent to Addis and other council members.

On Wednesday, Addis read a written statement from behind the dais at the Morro Bay council meeting. Addis, who was elected to the council last November, said, 33 days after taking office, “misogynistic assaults” began appearing in her inbox.

During her prepared statement, Addis read some of the email messages she received.

“You have got to be one of the most vile, despicable, hypocritical [c-words] I have ever had the pleasure of seeing,” one of the emails said, according to Addis’s statement. “You put yourself out as a member of the women’s movement and march, and are probably a member of the ‘me too’ movement as well.”

Addis said the message also contained a photo of her along with a photo of a Nazi flag.

The councilwoman said she shared the email with a colleague who contacted the individual who wrote the message. That prompted a follow-up email from the man in which he called her a coward.

“You don’t have the ovaries to respond to me directly,” the man allegedly wrote.

Addis said she alerted authorities and asked the man directly to stop. He then sent an email with his photo demanding Addis change her stance on city policy, the councilwoman said.

“So, you would like me to stop the personal attacks against you. Well I would like you to [change your position on a city policy]… If you agree to this, I will agree to stop any personal attacks… you need to grow a pair and put on your big girl pants… calling law enforcement… is so weak and childish of you,” the email read, according to Addis’s statement.

Addis said she later learned the man had been posting about her for months, making comments like, “She is nothing but a crotch taco,” and “She appears to be an attractive woman. Maybe she can get a job as a pole dancer.”

At Wednesday’s meeting, Addis said she was shocked by the gender-based aggression directed at her.

“When women and other victims speak truth we amplify out power,” Addis said. “Silence and fear do not help us and do not help those who will face abuse after us.”

Other council members, including Mayor John Headding, joined Addis in condemning the emails they received. Heading said, albeit not sexist, the emails he received crossed the line from passion to aggression and were full of vulgarity and hate.

The Tribune reports Morro Bay police have identified Mark Charles Hanson, 65, as the man who sent the emails. Hanson told the Tribune the emails express the disdain he and others have for Morro Bay council members who are not listening to their constituents about plans for the controversial new wastewater treatment plant.

Hanson said trying to be civil and to negotiate with the council members does not work. He said he is trying to get them to wake up someday.

The Morro Bay resident said he stopped sending emails to council members after a police sergeant spoke with him about the matter. But, Hanson said he would continue commenting on social media.

Morro Bay police conducted an investigation into the case, compiled a report and recommended that the SLO County District Attorney’s Office file misdemeanor annoying or harassing communication charges, according to the Tribune article. The DA’s office is currently reviewing the case.