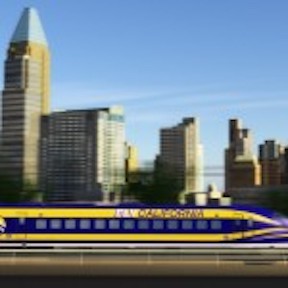 Amid an escalating feud between the Trump Administration and the state of California, a federal agency has announced its intent to revoke $928.6 million in funding already approved for California’s controversial high-speed rail project.

The planned high-speed rail, which President Donald Trump has criticized repeatedly, was initially intended to link Northern California to Southern California and, in particular, San Francisco to Los Angeles. The project has been delayed by problems with securing funding, acquiring privately held land and fighting legal challenges.

Earlier this month, Gov. Gavin Newsom announced during his State of the State address that California would shift its focus to constructing a rail line from Bakersfield to Merced. Trump responded by calling for the return of federal funds appropriated for the project.

On Tuesday, one day after California sued the Trump Administration over its plans to construct a border wall, federal Railroad Administrator Ronald Batory sent a letter to California’s high-speed rail executive, Brian Kelly, saying the federal government plans to cancel its bullet train funding agreement, effective March 5. According to the letter, the high-speed rail authority materially failed to comply with the terms of the funding deal and failed to make reasonable progress on the project, allowing for the termination of the agreement.

The federal railroad administration has based its determination on many factors, including failure to adhere to a project expenditure and construction schedule and failure to provide timely and satisfactory financial reports, according to the letter. The federal agency determined that California will not complete the project by 2022, which is the end of the agreement’s period of performance.

Likewise, Batory wrote in the letter that Newsom’s state of the state signals California will not deliver on its obligations.

“During his recent state of the state address, Governor Newsom presented a new proposal that represents a significant retreat from the state’s initial vision and commitment and frustrates the purpose for which federal funding was awarded (i.e., an initial investment in the larger high-speed rail system),” Batory wrote in the letter.

If California can show it has satisfied its obligations under its agreement with the federal government; make reasonable progress to deliver the project; and prove Newsom’s announcement does not constitute a fundamental change in the purpose of the project, then the federal agency will take that information into account before formally terminating the deal, according to the letter.

Newsom called the cancellation of the federal funding retribution for California suing the Trump Administration.

“It’s no coincidence that the administration’s threat comes 24 hours after California led 16 states in challenging the president’s farcical ‘national emergency,’” Newsom said in a statement on Tuesday. “The president even tied the two issues together in a tweet this morning. This is clearly political retribution by President Trump, and we won’t sit idly by. This is California’s money, and we are going to fight for it.”

Earlier in the day, Trump tweeted that California has wasted billions of dollars on the high-speed rail project and that it appears California is leading the 16-state lawsuit against his administration. Trump also tweeted that a border is desperately needed and much cheaper than the bullet train.

On Wednesday morning, Trump again tweeted about the high-speed rail, demanding that federal funds be returned.

“California now wants to scale back their already failed ‘fast train’ project by substantially shortening the distance so that it no longer goes from L.A. to San Francisco,” Trump said in the tweet. “A different deal and record cost overruns. Send the federal government back the billions of dollars wasted!”