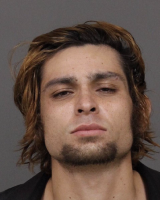 Shortly before 2 a.m., there was a burglary in the parking lot of an apartment complex located in the 1100 block of Fair Oaks Avenue. When officers arrived at the scene, they found a man getting out of a pickup truck that had a broken passenger side window

Officers detained the man, Darren Cody Edmunson, and found he was in possession of items stolen from the vehicle. Edmunson, 25, of Grover Beach, also had other stolen property in his possession.

Additionally, Edmunson had ammunition and pepper spray. Investigators believe Edmunson is connected to at least three other vehicle burglaries from that night.