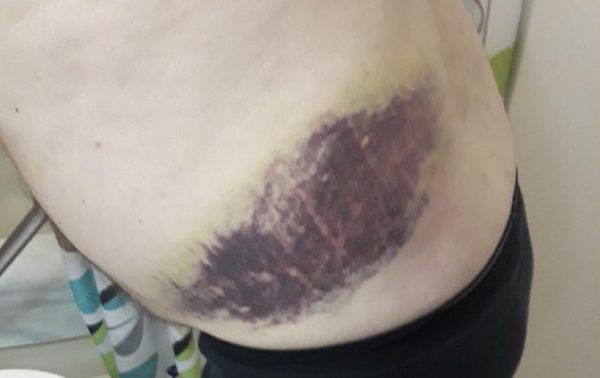 A bruise on Dane Senser’s back from the altercation

A 66-year-old man was transported to the hospital after a run-in with two men moving furniture for a local shop in San Luis Obispo, who claim the injured man was the instigator.

Shortly after 8 a.m. on Feb. 18, two men working for the Celadon House were driving a truck through Mission Plaza when they came close to hitting Dane Senser, who was drinking a cup of coffee in the park. Senser yelled at the men to slow down while driving in the park.

It is at this point that the men’s stories conflict about what happened next.

Senser says the driver of the truck, who appeared to be in his late twenties, walked over and punched him in the face. The passenger also began swinging at Senser. The driver then shoved Senser into a railing and a wooden fence, Senser said.

“My coffee hit the ground, my glasses flew off, and my phone flew into the creek,” Senser said.

While Senser lay on the ground yelling for someone to call 911, the two younger men took off.

Kelli Thorton, the co-owner of the Celadon House and one the mother of one of the men, came out of the shop and spoke to the responding officer before the officer assisted Senser, who was still lying on the ground, Senser said.

“The officer thought I was a man named Nick Pronto, who they have had trouble with in the past,” Senser said. “Even if I was Nick Pronto, they should have checked on me before speaking with the guy’s mother, who was not a witness.”

During the altercation, Senser lost a capped tooth and injured his back and abdomen. He was transported by ambulance to French Hospital Medical Center. The younger men were not injured.

The city has multiple cameras in Mission Plaza, but the police department is not currently releasing the video because of the ongoing investigation.

“They can say what they want, the video will show what really happened,” Senser said.

On the other side, Thorton said Senser started the physical altercation. Because of these types of issues at Mission Plaza, she decided to close her store, Thornton said.

SLO Police Capt. Chris Stayley would not comment on the altercation because of the ongoing investigation.

“The case involving Dane Senser is an active investigation that will go to the DA’s office for review,” Stayley said. “We are not able to discuss any of the details of this case at this time.”