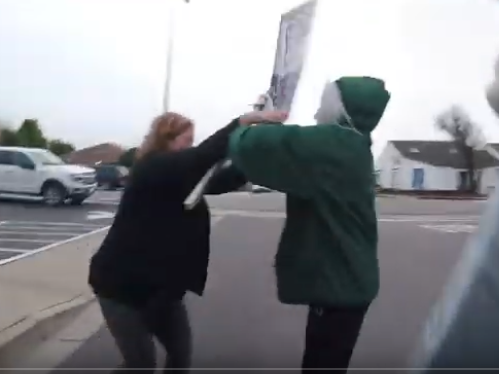 The owner of a music school with locations in both San Luis Obispo and Arroyo Grande is claiming two protestors assaulted her, but video shows she was the assailant. 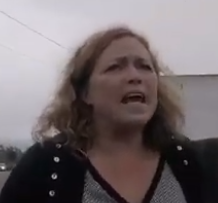 After calling both the SLO and Arroyo Grande police departments to inform them of their intention to picket on Feb. 27, former conservatory employee Kenneth Davis and his supporter Brian Der Garabedian held signs and marched in front of the Tevelde Conservatory of Music on Higuera Street in San Luis Obispo. The pair wore masks of Guy Fawkes, a controversial figure from the 1600s.

Later in the day, Davis and Der Garabedian moved their protest to Arroyo Grande. Within 14 seconds of the picketers’ arrival, Tevelde came out of the building and began grabbing, swatting and kicking at the protesters.

In a video captured by a GoPro camera attached to one of the protestor’s jackets, Tevelde accuses the protesters of scaring students at the music school. While Davis and Der Garabedian walk backwards and ask Tevelde to stay away from them, she charges forward swinging at the men and their signs.

During the altercation, a child is seen standing near a car while Tevelde is calling the protestors “fucking wimps” and “small dicks.”

She then stops chasing the protestors and begins filming a short video with her phone.

“These big guys are attacking one little lady,” Tevelde says into her phone. “I will send that to your father, you little dick.”

Tevelde then sent the video to Davis’ parents.

As the police cruiser drives up, Tevelde begins yelling that the protestors are trespassing on her property. One officer talks with Tevelde while the other orders the protestors to sit on the curb.

Even though the officer originally thought a stick from a protestor’s sign was a machete, he was respectful to both of the protestors.

During the interview with Davis and Der Garabedian, the officer told them Tevelde was claiming they were the assailants, and that they had struck her with one of their signs.

The officers later made a copy of the video while Davis and Der Garabedian filled out citizen arrest forms.

Following the incident, Tevelde told reporters Davis and Der Garabedian had placed a boom box on her windowsill making it impossible to teach lessons, that the protestors were wearing a devil mask and a ghoul mask, and that they scared the students. 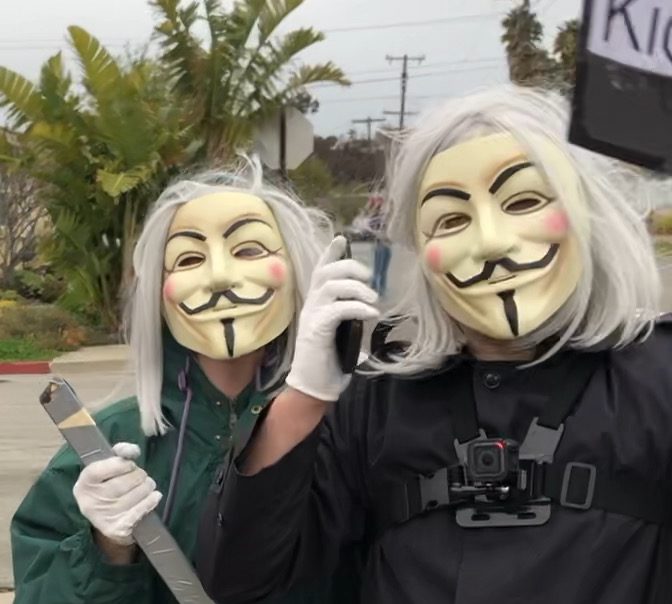 In support of her claim that the protestors were the aggressors, she said the officers put handcuffs on both Davis and Der Garabedian before having them sit on the curb.

“All I care about is my students,” Tevelde said. “I can tell you why they left. They ran because they knew what they were doing was wrong. It is terrorism what they are doing to me.”

However, the video of the incident contradicts Tevelde’s recollection of the altercation.

The men held a small radio and there was no boom box set on Tevelde’s windowsill. In addition, the men were not wearing ghoul and devil masks and officers never arrested or handcuffed either Davis or Der Garabedian.

Davis and Der Garabedian provided reporters with a full copy of the GoPro video, but asked reporters to leave out the portion with officers at the scene.

On Feb. 1, Davis filed a claim in small claims court against Tevelde and the Tevelde Conservatory of Music for $10,000 in unpaid wages and unpaid overtime.

On March 6, Tevelde filed a civil suit against Davis and Der Garabedian for battery, trespass, intentional infliction of emotional damage, and defamation. A case management conference is scheduled for July 10.